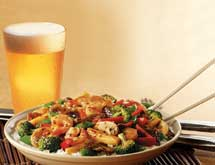 Visitors to bd’s Mongolian Grill get more than just a typical dining experience. Upon entering the restaurant, diners have a choice of fresh meats and vegetables in what the casual dining chain calls its “Market Area.” After gathering their ingredients in a bowl, they take their creation over to one of their “master grillers” who then cooks their feast on a 7-foot flat-top grill in open view, where a key part of the bd’s experience begins as their creation is stir-fried.

“It’s very interactive,” President and CEO Rodger Head says of the Minnesota-based company’s dining concept. “Our grillers are very high-energy and very outgoing; we refer to the interaction here as ‘eat-ertainment.’”

The chain has 35 locations in 13 states in the Midwest, Southeast and Mid-Atlantic, as well as in Ulaanbaatar, Mon­golia. The company is the first U.S.-based restaurant concept to have a franchise in the Asian country, Head says.

“Our founder Billy Downs is very proud of that location,” he adds. “That res­t­aurant does quite well; we’re pretty proud from an authenticity standpoint that we actually have a restaurant in Mongolia.”

Downs, known as “bd,” founded the restaurant in 1992 in Royal Oak, Mich. Downs sold the company to Head and other investors in 2008, but remains active on its board, Head says.

While bd’s Mongolian Grill is not unique in offering the Mongolian build-your-own stir fry concept, its atmosphere and unique offerings make it stand out, Head says.

In addition to Asian-style stir-fry offerings, bd’s Mongolian Grill offers several different styles of meals, including Italian, Mexican and Caribbean-style offerings, all cooked by their master grillers on our flat-top grill. The restaurant recently marked Oktoberfest – or “Mongo Okto” as they like to call it – with bratwurst, sauerkraut and other German-style options.

“We’ve taken this concept way outside of the box,” Head says. “We have created a concept that, yes, is a Mongolian create-your-own stir fry concept, but with the uniqueness of offering a variety of ethnic and seasonal flavors.”

The restaurant also offers a full bar and a broad line of appetizers and desserts.

Key to the company’s high energy and fun atmosphere is its staff. “We’re looking for a specific profile for each position regarding personality,” Head says. “We’re looking for people who like being around other people and are excited about delivering a ‘magical’ experience to our guest.”

The company has an ongoing training and development program, entitled “Career Quest,” a program meant to guide employees from hourly team members to management and/or franchisee, Head says.

“We’re a very people-oriented company,” he adds, noting that bd’s employs many long-tenured staff members including those who have worked for the company for more than 10 years.

Although Head says sales were impacted in some markets during the recession; most of its locations have fared well the last few years. Six new locations have opened in the last two years, with more franchises expected to open in the next few years.

Of the company’s 35 stores, 20 are franchise-owned. A recently signed agreement with a franchise group in Pittsburgh will bring five restaurants to that region, and eight other franchises are under development. “We have quite an aggressive franchising program going on now,” Head adds.

Other prospective locations include Colorado, Utah and Idaho, as well as other international locations. The concept has proven a popular draw in new markets upon opening.

“Because of the concept’s uniqueness, it almost has a cult following,” Head says. “When we open in a new market it’s amazing how many people are familiar with the brand and excited about it.”

“It’s interesting how, even though we’re small, the notoriety of the brand is pretty strong.”

Part of the reason for the brand’s name recognition is the company’s use of social networks such as Facebook as well as its “Club Mongo” e-mail program, Vice President of Marketing Denise Head says.

The company also has a strong commitment to charity that originates with its founder. A portion of the proceeds from the Ulaanbaatar location support the Mongolian Youth Development Foun­dation, a non-profit organization dedicated to helping children.

More locally, the company supports schools and community organizations through its “guest griller” program, which offers volunteers the chance to join bd’s grill staff for an evening. Money is raised through ticket sales, tips and merchandise sales; around $200,000 was raised for organizations last year through the program, Denise Head adds.

In September, “Team Mongo,” a group of elite triathletes sponsored by bd’s, raised more than $50,000 for the Boys and Girls Club of South Oakland County during a “Spin Madness” spin-a-thon event.

“We feel being involved in our communities is a two-way street,” Denise Head says. “We are not a huge organization, these are a few examples of our way of doing community marketing.”