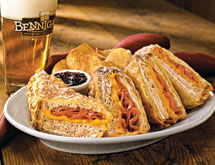 To turn around a moribund brand, it takes an unwavering commitment to breathe new life into the once-successful concept. However, President and CEO Paul Mangiamele doesn’t intend to turn around the fortunes of only his company, Bennigan’s Franchising Co. Instead, he says Bennigan’s is on the cusp of revitalizing the casual-dining category, raising the bar for the Irish-inspired brand as well as its competition throughout the United States.

“For me, I’m not trying to lead the evolution of Bennigan’s, but a revolution in casual dining,” Mangiamele says. “It has gone into a coma in the last five years because no one has taken the time to figure out what the new iteration of casual-dining and foodservice should be.”

Founded in 1976 in Atlanta by Norman E. Brinker as part of the Pillsbury Corp., Bennigan’s made its name in the 1980s and ’90s by introducing the casual dining concept. Now, it is revolutionizing casual dining once again as the company embarks upon a “Bennigan’s Renaissance.”

However, more recently, Bennigan’s suffered from what Mangiamele calls “brand drift.” The concept had drifted away from what made it successful in its heyday, and then in 2008, Bennigan’s declared bankruptcy and shut down its corporate-owned locations throughout the United States.

“We’re not unique in suffering from brand drift,” Mangiamele says.

“Comp¬anies get into this quite often – a lot of retail and foodservice concepts have successful components, then try to be different or don’t keep up with the changing trends, physical plan or the menu,” he continues. “They drift away from components that made them successful in the first place. Bennigan’s was a victim of that, as well.”

Today, Mangiamele is leading the charge he calls the “Bennigan’s Renaissance,” which he says will restore the brand with the integrity it boasted when the concept was first introduced in 1976.

‘360-degree Analysis’
Mangiamele says Bennigan’s required a total overhaul of its entire operations, so he started by performing what he described as a full “360-degree analysis” of everything that had to do with the brand about a year ago. This includes décor, technology, physical spaces and even personnel.

It was determined that a major overhaul was necessary to bring the brand back to what had made it so popular in the first place. The theme of the initiative, according to Mangiamele, is “remodeling, reenergizing, rebranding and renovating” while paying homage to Bennigan’s rich history and adherence to Irish traditions.

“Nothing was sacred except the history,” Mangiamele says. “What we see in the new Bennigan’s is an homage and an honor to the history. Not a lot of brands have been around for 36 years.

“We’re not aiming for what is hip today – we’re anticipating what is hip in the future and creating a brand that will have longevity,” Mangiamele continues. “We will completely differentiate Bennigan’s by doing those things.”

This initiative has been under way for about a year as Bennigan’s procures what it needs for all of its new programs. These areas of focus include real estate, construction, design, menu consultants and other capabilities required for a major reinvention of a brand.

This includes evaluating the existing workforce, as well. Mangiamele admits that people are the strongest asset for any restaurant brand, and that means upgrading the staff where necessary.

Uptick in Sales
The customers are returning to Bennigan’s in droves if sales are any indication. Mangiamele says well before the close of the company’s first fiscal year under this new initiative, sales already have increased. An even more indicative metric is customer count. Mangiamele says not only are customer counts of new and existing guests up overall, but the frequency of their visits has increased, as well.

Mangiamele credits the upgraded menu items for bringing customers back to Bennigan’s despite the downturn in the economy. It helps that Benn¬igan’s has managed to improve the quality of its ingredients while avoiding spread¬ing the costs to customers. Man¬giamele says the restaurant has accomplished this by timing its specials app¬ropriately and partnering with vendors who share the restaurant’s vision.

For instance, the Bennigan’s half-pound, fire-grilled burger is the brand’s best-selling item. Beef, however, has been pricier than usual recently. So, Mangiamele says the company has customized its own “Bennigan’s cut” that ensures its handmade patties are cut specific to Bennigan’s specifications.

“We took the time to work with vendor-partners to come up with the Bennigan’s cut,” he says. “Our burgers represent 25 percent of sales, so we are committed to finding the absolute best beef that would make our burger stand out without raising our price point.”

The company is also introduced a new homestyle French fry that Man¬giamele says is rapidly becoming one of the signature items on the menu.

Along with maintaining its Irish heritage, Bennigan’s is keeping an eye on the latest consumer trends throughout the casual-dining industry. That means placing an emphasis on healthful food options on the menu.

Mangiamele stresses that these options are not meant to replace the traditional American fare on Bennigan’s menu since 1976. Instead, this allows patrons with a variety of tastes and demands to visit Bennigan’s knowing there will be plenty of entrees for them to eat.

“What I wanted to be really known for is producing top-notch American fare and hospitality,” he says. “Whether you want low-fat or low-carbs with salads, or whether you want a deep-fried sandwich or one of our famous burgers, our extensive menu has something for every palate.”

Catering to Demands
Not only can consumers of all tastes and demands have whatever they want from Bennigan’s, but soon, they will be able to have it wherever they want, as well. The brand is launching Bennigan’s On The Fly for nontraditional venues like airports and malls, as well as a catering service.

For Mangiamele, it is another way he “strives to be legendary,” which is a mantra he wants to permeate through the entire organization from the top down. He longs for the days of casual-dining experiences with good service as the standard, not as a surprise. He believes quality can return to the casual-dining concept, starting with each and every Bennigan’s location.

“I go out and I’m shocked to see that good service is an anomaly,” he says. “We’ve come to expect a bad experience. The Bennigan’s revolution is about changing all that. We’re creating memorable dining-out experiences, and we will soon be leading casual dining again.”