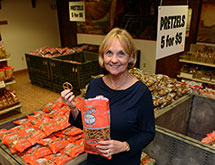 Success is a team effort at Benzel’s Bretzel Bakery Inc., President Ann Benzel says. “Everyone’s job description here is ‘we do what we need to do to get the job done,’” she says. “We all value the contributions we make to see this company succeed.”

Based in Altoona, Pa., Benzel’s Bretzel Bakery has specialized in pretzel products for more than 100 years. The grandfather of Ann Benzel’s husband, Adolph Benzel, started the company in 1911 after emigrating from Germany.

“It was Adolph’s burning desire to start his own business, and so he did in a 75-square-foot building here in Altoona, mixing product by hand and delivering it by horse and buggy,” she explains.

By 2003, “We had gone from a regional bakery to a national distributor,” Ann Benzel says. Today, Benzel’s Bretzel Bakery operates from an 180,000-square-foot facility.

The company has a broad product line, which includes cinnamon, chocolate graham, oat bran, whole and honey wheat, and multigrain pretzels, as well as “the simply plain old pretzel,” which remains its top seller, Benzel says. “Flavors come and go, but the bulk of our business centers around the demand for the consistent, high quality and taste of our pure pretzel products.”

Benzel’s Bretzel Bakery also utilizes a different recipe for nearly all of its products, unlike its competitors. “If you look at the ingredients listed, they are certainly similar, if not the same, but each product has its own variation or formula as well as processing technique,” she says. “We are having great success because all of our products taste so good and are also a great value.

“The company continues on the dream of not only the Benzel family, but our dedicated family of employees,” she asserts. “I believe dreams are essential.”

Absolutely Amazing
Benzel’s Bretzel Bakery is a modestly sized company, but it sets itself apart through its technical expertise. “We know that it is the processing techniques as well as people that make or break a product,” Benzel states.

In most cases, when a client wants something done differently, “We can make it happen, sometimes in just a matter of days, [while] larger companies can take months,” she says. “Customers come to us with their ideas and we work with them to do what is needed to complete the job.”

The company also has shaved dollars from its overhead by doing much of its machine maintenance in-house and designing much of its equipment on its own. “We are virtually self-contained and do almost everything internally,” she boasts.

Benzel’s Bretzel Bakery recently finished a three-year equipment upgrade. “We’ve done a lot of additions in our stacking area with ovens, extruders [and] a new mixer,” she says. “A lot of work goes into that. Everything’s so computerized today. You can push a button and the ingredients of what you’re making will go into the mixer. It’s absolutely amazing.”

Safe and Sound
Safety has taken center stage at Benzel’s Bretzel Bakery, Benzel says. “It is an aspect of the business which is very important to us and to which we dedicate a great deal of time and dollars,” she says. “Everyone is involved, from senior management to housekeeping.”

Previously, the company used to have 12 safety rules in the production area. “Now, we have 110,” she says, noting that they range from rules about walking in the door to the use of color-coded utensils.

“Our employees and any visitor must pass through an air shower before entering the production area at all times,” she says. “We [also] undergo a multitude of inspections annually.

Benzel has worked at Benzel’s Bretzel Bakery for more than 35 years and managed multiple departments, including its factory store, mail order business and marketing departments. She is proud of the company’s longevity.

“There have been so many changes in the industry,” she says, noting that Benzel’s Bretzel Bakery has watched many of its competitors close their doors. “Today, it’s probably down to maybe 10 across the country. We’re a small fish in a very, very big sea.

“We’re thriving and I’m very proud of that,” Benzel continues, adding that Benzel’s Bretzel Bakery helps support the livelihood of her employees. “It’s not just me and my family; it’s 92 other families that rely on us.”

After completing the extensive upgrades, “I’m looking for a time out, so to speak, to catch our breath and regroup,” she says. “Hopefully, it will continue to be business as usual for a bit. We are in a really good place right now.”