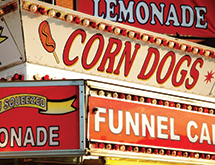 Berk Enterprises is an industry-leading provider of plastic, paper and biodegradable foodservice disposables, janitorial products and concession supplies. Operating from a 200,000-square-foot Ohio warehouse, the company is an international distributor of custom concession supplies.

It also operates the Berkley Square brand of cutlery, and Environ brand of earth-friendly tableware. The company was founded in 1946 by Harold Berk, starting off as a paper distributor, exterminator and coin shop. In 1954, it launched Warren Paper and Sanitation. Today, however, Berk Enterprises is composed of three companies:

“Berk Enterprises is a family owned business that grew from a mom-and-pop operation to a company that sells across the U.S. and parts of the E.U.,” says Rob Berk, who is the owner, president and CEO of Berk Enterprises. He joined the company in 1977.

Plastic Cutlery Imports
Berkley Square is the import division of Berk Enterprises that handles the distribution of foodservice disposables. Its biggest-selling products are plastic cutlery and plastic drink straws. “We are one of the first in the U.S. to import plastic cutlery from China,” Berk says. “In the beginning, people laughed at the idea of buying cutlery in China. It was unheard of.”

The company, however, hired a former national accounts manager for Solo Cup Co. who traveled throughout the East Coast and Midwest showing the products. “Initially, people just scoffed at the idea of even considering Chinese products,” Berk recalls. “China is not known for its cutlery. But we started quoting prices and there were some savings available. After six months, one customer finally gave us a chance. He found he saved a little money he could then use for other things and the customers didn’t seem to mind the cutlery was made in China.

“Slowly, word spread and more and more started buying it,” he adds. “Then, word really got out throughout the industry: These products made overseas are acceptable and priced competitively.”

Berk Enterprises’ customers include restaurant chains such as the 992-location TGI Fridays of Carrollton, Texas, and 62-location Quaker Steak & Lube of Sharon, Penn., known for its chicken wing sauces.

Berk Enterprises doesn’t sell food. Instead, it provides packaging and any kind of disposable products used in the foodservice industry. Those include products such as toothpicks, food skewers for shish kebabs, plates and cups. Another top product is plastic cutlery “kits” that include a napkin, plasticwares and other items such as salt or condiment packages all packaged together.

‘Flash is Cash’
Attendees at the local county fair may never consider who supplied the packaging for a favorite treat, but that’s the business of Berk Concession Supply. It provides products such as paper lemonade cups to carnivals, fairs, festivals and outdoor amusement foodservice vendors.

Berk explains that food containers must be fun and flashy to fit in with a carnival atmosphere. For example, a hot seller is a plastic bucket for french fries and other snacks. “Instead of plain old generic cups, for this industry you need very distinctive products with great graphics,” Berk explains. “The mindset is flash is cash. You might think a french fry bucket is crazy but people in outdoor amusement environments are buying them like crazy. It comes with a handle that is easy to carry and [makes for] a nice presentation.”

Berk Enterprises works with customers on a personal basis and can create custom designs and special deals such as adding company logos to products. In fact, its in-house design studio specializes in customization. “We can produce products with great graphics for very little if no upcharge, and that flash helps sell product,” Berk says.

Berk Paper and Supply was the first Berk Enterprise operation. It supplies maintenance chemicals, supplies, kitchenware and accessories to foodservice businesses in a 60-mile radius of Warren, Ohio.