Berkeley Bowl prides itself on a one-of-a-kind produce selection that has made it untouchable by the competition for 40 years.

Berkeley Bowl has made a name for itself in the supermarket industry over the past 40 years by being the go-to place for a vast selection of high-quality produce. “One thing that distinguishes us in the nation and the world is the variety of produce we carry,” General Manager Steve Tsujimoto says. “I used to run produce for a major retailer and have been to most competitors across the nation and I’ve never come across a retailer with as much variety of produce that we carry.”

The Berkeley, Calif.-based company was founded in 1977 as a small neighborhood market with a focus on produce. “It started off as a little produce stand and that’s still the main focus,” Tsujimoto adds. “A lot of grocery stores build from the center of the store out, but Berkeley Bowl started with the produce market first and expanded from there.”

After getting its start in a small bowling alley, Berkeley Bowl in 1999 moved into a 40,000-square-foot former Safeway site. In 2009 the company opened its second store, Berkeley Bowl West, just a mile-and-a-half away from its first location. “Usually when you open a store so close to another they cannibalize each other, but we noticed there was a tremendous amount of people coming from outside of Berkeley,” Tsujimoto notes. “We opened up Berkeley West closer to the freeway and now we have two predominate stores.” 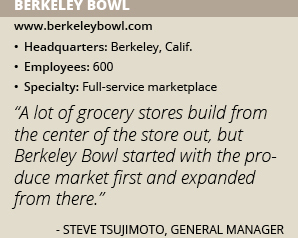 Berkeley Bowl has also made a name for itself in Vietnam and Japan. Filmmakers in Vietnam came to the supermarket to film a documentary and chefs from Japan regularly visit to film cooking shows utilizing its one-of-a-kind selection of produce. “It’s all word-of-mouth,” Tsujimoto says. “We have a lot of tourism agencies bring tourists from around the world, such as Japan, Italy, etc., to the store because they can find whatever they are looking for here. We have every pineapple from every country you can think of in different sizes, for example.”

True to its Roots
One of the biggest challenges Berkeley Bowl faces today is finding the right people to work in its stores. “We hire for personality, attitude and experience,” Tsujimoto says. “Attitude is very important to us because they have to have the right mentality to work here.”

Berkeley Bowl is and will remain a family owned supermarket, holding firm on its values that family comes first. The store opens at 9 a.m. and closes at 8 p.m. every day except Sunday when it opens at 10 a.m. and closes at 7 p.m. “The ownership doesn’t want employees here past a certain time because they want them to be home with their families,” Tsujimoto explains. “We want good workers and to reward them so they never leave. It’s very family-oriented and a great company.”

Berkeley Bowl says it never takes advantage of the lower cost for greater margins. “We instead pass on the savings directly to our customers,” Tsujimoto says. “For example, when we do have a flush on strawberries, we may retail them at a much lower price such as 89 cents a package instead of two for $5 like other retailers because when we get a deal the customer gets a deal.”

Staying Innovative
Berkeley Bowl does not have an e-commerce platform at this time, but the company is looking at providing some items for purchase on its website. “Online is the direction everyone is going and now we are looking at that more heavily, but people love the shopping experience here,” Tsujimoto says. “We will have online shopping one day, but have to pick and choose which products will be on our website.”

The company says it may not be possible to put every variety of every produce item it offers on the website because it would be too cumbersome for its customers. But it will work on a solution for its customers, Tsujimoto adds.

Moving forward, Berkeley Bowl has one project in the works that is confidential. The company is still in the research and development phase of this project, but is expected to announce more details next year. Once that project is underway, Tsujimoto expects the company may look to open a third location in California. “The no. 1 reason people choose their grocery store, besides location, is based on the quality of the produce,” he adds. “That’s why I believe the competition hasn’t really affected us in a meaningful way and the reason why we stay strong.”