Back to Profile Gallery > BIGGBY COFFEE 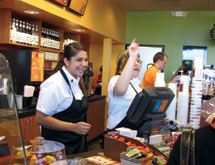 It the beginning of 2013, BIGGBY COFFEE executives set a goal for the company to sign 48 new franchise contracts. By the end of October, it was well on its way to meeting that goal, with 43 contracts completed. “For a company the size of ours that started with 133 stores at the beginning of 2013, doing 48 contracts was a pretty aggressive target,” says Michael McFall, president of the East Lansing, Mich.-based gourmet coffee retailer.

BIGGBY COFFEE this year opened 24 new franchisee-owned stores, with between 40 to 45 new locations anticipated in 2014 as a result of the newly completed franchise agreements. New BIGGBY COFFEE locations typically take roughly a year to open from the time a contract is completed, McFall says.

The company is aiming even higher next year, as it has a goal of completing 60 new franchise contracts in 2014. “With 43 completed so far in 2013, we don’t believe that is an unrealistic number,” McFall adds.

McFall attributes the company’s growth to two factors, the first of which is the startup cost to new franchisees. “The amount of money it takes to open one of our stores is dramatically lower than it was four years ago, and lower than anyone else in the business,” McFall says, noting the average investment in a BIGGBY COFFEE franchise to be $220,000. “If you want to get into the gourmet coffee business, we’re a very attainable option.”

The second component of BIGGBY COFFEE’s growth strategy is its geographic focus, mainly within the state of Michigan. The company also oversees franchises in Ohio, Indiana, Wisconsin, Illinois, Kentucky, South Carolina, Texas and Florida. “We’re not franchising all over the country and spreading our resources thinly,” McFall says. “Because we have such significant brand density and positive brand recognition in Michigan, when we open a store here they do very well.”

‘Fun, Exciting and Energetic’
All BIGGBY COFFEE franchises aim to appeal to a broad range of customers by providing an unintimidating and unpretentious atmosphere. “The thing that really differentiates us from other coffee concepts at the retail level is we’re gourmet coffee for the `average Joe,’” McFall says. “When you think of BIGGBY COFFEE, you think of a concept that is fun, exciting and energetic.”

From a branding perspective, BIGGBY COFFEE positions itself between the two ends of the retail coffee spectrum: fast-food restaurant and convenience stores on one side, and high-end national chains on the other. The stores’ relaxed atmosphere and range of products allow it to reach customers from both sides of this spectrum, he adds.

BIGGBY COFFEE’s approach to gourmet coffee retailing dates to the company’s founding in 1995 in East Lansing, Mich., by Bob Fish and Mary Roszel. They opened a second location in 1997 in downtown Lansing, Mich., and in 1998, the founders formed Global Orange Development LLC with McFall to franchise the BIGGBY COFFEE concept. The first franchise store opened in 1999 in Okemos, Mich.

BIGGBY COFFEE locations offer a wide variety of hot and cold drinks. Besides its signature drip blend, BIGGBY offers something for everyone.

Buying In
BIGGBY COFFEE owner/operators come from myriad backgrounds, ranging from experienced retailers and franchisees to families and first-time entrepreneurs. “Our franchises are enthusiastic about executing our business model and system,” McFall says. “We’re looking for someone who buys into the philosophy and system we advocate.”

BIGGBY COFFEE’s business model is designed around a restaurant-like platform. “We’ve set our locations up as if our espresso bar is a high-volume kitchen,” he adds. “Every position has distinct, well-defined priorities.”

Franchisees have clearly bought in to the BIGGBY COFFEE philosophy, as evidenced by the company’s placement in a recent survey conducted by Franchise Business Review. The publication in 2013 ranked BIGGBY COFFEE the 16th best franchise in the United States based on operator satisfaction. “If our owner/operators are satisfied with us and our concept, that means they’re doing well, which speaks volumes about our company,” McFall says.