Back to Profile Gallery > Biggby Coffee 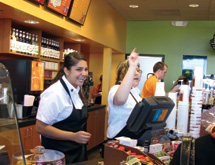 Since when did preparing coffee become a ritual with the barista as high priest or priestess? Not at Biggby Coffee, where an emphasis on the joy of coffee outweighs its gourmet pretensions. What sets Biggby Coffee’s coffeehouses apart are the cultural values and how its managers approach merchandising and branding.

“Our cultural values that we use consistently throughout our brand are to be happy, have fun, make friends, love people and drink great coffee,” President Michael McFall emphasizes.

“The end-result of those cultural values is we’re a very unpretentious brand, very friendly and unintimidating. So the end-result is that we have a very broad-based appeal in terms of our customer base. A typical customer can walk into our stores and feel very comfortable. Our typical customer is middle American.”

Some of that friendly Midwestern attitude can be traced to the company’s founding in 1995 in East Lansing, Mich., by Bob Fish and Mary Roszel. They opened a second location in 1997 in downtown Lansing, Mich., and in 1998, the founders formed Global Orange Development LLC with McFall to franchise the Biggby Coffee concept.

The first franchise store opened in 1999 in Okemos, Mich., and in 2008, the company celebrated its 100th store opening. It now has more than 140 stores in nine states. Approximately six years ago, the company sold the coffeehouses it owned.

“We decided at that point in time we wanted primarily to focus on the franchise model and become the best franchisor we could,” McFall recalls. “We’ve been highly focused on that. We will absolutely get back into owning and operating stores at some point, but the last seven years have been about developing and becoming the best franchisor we can. When you wake up every day and you’re focused on the owner/operator and every ounce of thought and energy you have goes into helping that owner/operator become better at running their store and developing their business, it brings all your actions much more clarity. We don’t have any distraction in terms of what we’re doing daily to assist our franchisees in developing their businesses.”

No Mere Cup of Joe
Gourmet coffeehouses are credited with starting the revolution in American coffee tastes from a bottomless “cup of Joe” endlessly refilled by waitresses who called patrons “honey” to specialized varieties of coffee beans meticulously roasted, blended and brewed at just the right water temperature in the hushed tones of a library. Although what has resulted is a generally stronger brew, not all coffee drinkers have made that transition.

“When we started, our flavor profile – which hasn’t changed since our inception – was a southern Italian style, which is a much mellower style of espresso, which we believe would cater to the Midwest and middle America much better than the much darker roast,” McFall says. He admits that the darker roasts have their following, but notes, “Coffee is very much a personal preference.”

In keeping with those personal preferences, Biggby Coffee offers a wide variety of hot and cold drinks with pronounceable names. Besides its signature drip blend, Biggby offers a variety of coffee drinks such as specialty coffee lattes, cappuccinos, café au lait, espresso, hot tea and tea lattes, including chai lattes. Iced and frozen beverages also are a big part of the business.

“Tea lattes have been a very aggressive category for us for the last couple years,” McFall says. “We had it in development for a number of years. We wanted to make sure that when we rolled it out, we had the recipe right. It’s not the easiest product to develop, because steeping tea in milk is complicated to do right. So we’ve got some proprietary ways of making that drink.”

Complementing the beverages are a daily selection of specialty cookies and baked goods, fruit cups, yogurt parfaits and bagel sandwiches. “We’re primarily a beverage retailer,” McFall emphasizes. “That is our focus. We generate 85 percent of our revenue through beverage sales. We want to build our business and generate our revenue through beverage sales. We want to be known as the best gourmet coffee retailer in any marketplace we go into. Our food offerings complement the beverage sales and the same with our merchandise offerings.”

Hot Java
Biggby Coffee has close relationships with trusted suppliers for its proprietary blends it has used for years. “We’ve never changed our espresso blend,” McFall stresses. “Our drip coffee offering has been very consistent for a number of years. What we focus on with our vendor is making sure they are buying the beans at the highest quality. They’re not technically partners in our business, but it feels like they are. We have worked with them forever.”

For many other aspects of the business, Biggby Coffee tries to use few third-party vendors. “We do almost everything in-house,” McFall maintains. This includes in-house graphics design, public relations, fulfillment on marketing materials, point-of-sale software development and secret shopping. “We don’t farm that out,” McFall says. “We believe we know our business very well and better than anyone else.”

Drive-thru Convenience
The biggest trend McFall sees developing in the coffeehouse business is the escalating competition in convenience from fast food outlets and gasoline station’s convenience stores. Competing with those companies’ locations and convenience advantages is more of a challenge to him than competition from other coffeehouse chains. But he sees Biggby Coffee locations with drive-thrus as being able to answer that competition.

Another area in which Biggby’s has been making strides is in keeping its franchise investment low. “We’ve worked very hard to reduce the investment in our stores,” McFall stresses. “We spent the better part of two years redeveloping our footprint and our layout in order to dramatically reduce the investment. So I would say that’s a very key differentiating point for our franchise versus others.” The current average Biggby Coffee store size ranges from 1,200 to 1,600 square feet.

The company also solicits feedback at monthly meetings with the International Biggby Franchise Association. “They’re involved in all our strategic planning, product development and product rollouts, primarily through the leadership they have chosen of the association,” McFall says.

Community involvement usually occurs at the local level. “How it works best is when owner operators engage their community in things they are passionate about,” McFall maintains. “It just seems to work a lot better.”

For the next five years, he plans to establish another 100 to 150 Biggby locations in the Midwest and then grow nationally. “We’re primarily in Wisconsin, Illinois, Indiana, Ohio, Michigan, South Carolina and Texas,” he says. “We’re working on a store in Florida and in Kentucky. We’re not concerned about competing in Minnesota, California, Washington or New York in the next five years.

“The other piece of it is to focus on being the best beverage retailer we can be,” McFall resolves. “That is our focus, and we won’t get distracted from our mission. That is what we do and we do well, so we’re going to continue to do that.”