Billy Sims BBQ is poised for significant growth of its fast-casual barbecue franchise.

If you’re looking for traditional pit-smoked and cooked barbecue, look no further than Billy Sims BBQ. With 55 locations and counting, the fast-casual dining operation treats its customers to always-fresh smoked meats. When customers come into any of its locations, they’ll go down the line, choose their smoked meat and see the meat cutter carving their meat in the pit.

“There’s some entertainment value to it,” President Jeff Jackson says. “We’ve got a very nice mom-and-pop atmosphere for being a chain. We work on our customer service to go above and beyond for our customers, always trying to make them feel good and excited to be there.” 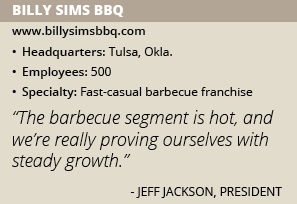 Meet and Greet
Billy Sims is a former professional athlete celebrated for his time spent with the Detroit Lions, even winning NFL’s Rookie of the Year award in 1980. After fives seasons, he retired from the NFL in 1985 and began a career of entrepreneurship, endeavoring to work in sports marketing and nonprofit organizations. Jackson originally worked in sports retail, marketing licensed apparel and other goods, and met Sims one day when he was doing an autograph session and meeting his fans.

“I realized, while watching him with the people, I thought, ‘My gosh, I got to do something more with this guy! He goes above and beyond,’” Jackson recalls. “I told him, ‘Let’s do a barbecue restaurant!’ He thought I was nuts, then we talked about it and we got together, collaborated and we did a barbecue restaurant. The rest is history.”

Together, the business partners have built Billy Sims BBQ into a successful franchised business. Sims, as the namesake of the restaurant, is still very involved. He visits the different locations regularly and meets with fans and diners. In addition, the company has developed sauces and meats that it sells at the retail level, and Sims is instrumental in promoting those as well.

“I keep him on the road,” Jackson says. “He’s out there promoting the business, shaking the hands and chatting with the customers. I’m proud of where we’ve gone to where we are now. We’re really excited for the future and what’s in store for us. The barbecue segment is hot, and we’re really proving ourselves with the steady growth. All of our hard work has paid off and is still paying off. “

Developing Markets
Thanks to its success, Billy Sims BBQ is looking to raise the bar in its growth strategy. Since its inception in 2004, it has opened about 10 to 12 locations a year, but now it’s aiming for 15 to 20 per year. The company’s first location opened in Tulsa, Okla., and it has since expanded outward to cover Kansas, Missouri, Arkansas, Iowa and Michigan and recently closed a deal for locations in Colorado and California.

“Real estate has been somewhat tough for us to get into,” Jackson notes. “We’re careful in finding the right rent structure. We want something that is high traffic with good visibility.”

To combat real estate market challenges, the company has begun offering packs of three to five restaurants for new franchisees. “We’re just out there looking in a good market,” Jackson continues. “We like to give the new franchisee quality territory – somewhere they can be successful in their market. In the next five years, my goal is 100 locations, but with the movement we’re seeing, we could have 125 to 150.”

Billy Sims BBQ looks to its franchisees to generate much of this success. The company looks for people with restaurant experience, but it’s not necessary. As long as someone has passion for the brand and excellent business acumen, they can help make Billy Sims BBQ a success. “Our process is simple but it makes our life easier when someone is good with business and knows how to direct and manage,” Jackson explains. “We have such good training, we can teach anyone. We’re looking for personalities that work well with us.”

For its franchisees, the company goes above and beyond to help them. Billy Sims BBQ offers an initial comprehensive, four-week training session, then ongoing training via seminars and continued field support with its operations team. When a new franchised location is ready to open, Billy Sims BBQ establishes all the tools and systems necessary to get it up and running, as well as any additional assistance the franchisee may need, including accounting, marketing, graphic design and advertising.

“It’s our goal for the franchisee to be successful,” Jackson adds. “We’re there to help in any facet.”