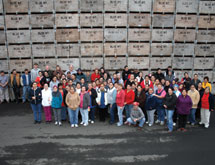 There are many expressions that highlight how special cherries are – “It’s the cherry on the pie;” “the cherry on top;” and “life is a bowl full of cherries.” Cherries are a sweet summer treat and they come in many varieties. Blue Mountain Growers (BMG) packages and sells 13 types of cherries from farmers in the Walla Walla Valley and Columbia Basin regions of northeastern Oregon and southeastern Washington state, as well as the Grande Ronde Valley in Oregon.

The farmers bring in Benton, Bing, Rainier, Sweethearts and other varieties of the fruit to be packed and distributed by BMG. The cherries go to national markets and also as far away as China, Japan and Vietnam, where the product’s high quality and wonderful flavor make it a popular choice.

BMG was established as a cooperative in 1927; the not-for-profit corporation was conceived to promote sustainable agriculture in the Oregon area and to help growers be more competitive. The 100 farmers in the cooperative grow their crops independently and then bring in the fruit to the plant in Milton-Freewater, Ore., where it is packed and shipped around the world.

The diverse microclimates in the geographic area close to the BMG plant produce not only cherries, but also many other fruits. The cooperative processes nine different varieties of apples, from Fuji and Gala to Golden Delicious and Granny Smith, to name a few, as well as four different types of prunes and plums. BGM packaged and sold 15 million pounds of apples and 5 million pounds of prunes and plums in 2012.

BMG CEO Justin Brunson explains how the company increased its cherry output from 2.7 million pounds last year to 8.6 million pounds in 2012. “We tripled our production of cherries because we have a state-of-the-art cherry line that we were operating only at 25 to 30 percent capacity,” he says. “We needed to increase capacity and increase the critical mass coming through the line, which we did, adding just a handful of new growers.”

The BMG facility is running close to full capacity now, accommodating the growth the company wanted. “We have three Red Pearl sizers and we are able to run five tons to the hour per machine, so 15 tons per hour through the three machines,” Brunson explains.

The Red Pearl Optical sizers can gently process the more delicate varieties of cherries, such as the Rainier variety, with a special “air cushion” system. This technology ensures proper sorting and quality control.

“The sizer takes photos of each cherry and determines the size and whether or not is soft and if they have the correct color,” Brunson explains. “The computer determines the box where they should be placed based on the size.”

The machines are made of stainless steel and have internal hydrocoolers to keep the cherries at near 34 degrees Fahrenheit, the optimum temperature to prevent the fruit from decaying too fast. “Cherries begin to degrade as soon as they’re picked,” Brunson says. “It’s very important to keep them cool to ensure their quality upon arrival at the final market.”

To preserve the cherries’ high quality, the exported crops are air-shipped to Asia in refrigerated cargo containers. “We send some fruit via ship in cool cargo containers, but it’s mostly flown there,” Brunson says. “There is a tremendous distance between our plant and Asia and we have to make sure the fruit is at its best upon arrival.”

Back to the Land
The fact that Blue Mountain Growers is a not-for-profit organization means that any retained earnings at the end of every year is returned to the farmers. “It’s what is called patronage,” Brunson explains. “We are trying to do anything we can to send the money back to the growers. We are able to operate at a better economy of scale at a reduced-charge rate compared to a for-profit corporation that needs to make the revenue, and our costs of goods sold is typically less than that of a profit based company.”

Blue Mountain Growers certainly is trying to make sure that life is like a bowl full of cherries for everyone around it, as well. The cooperative also makes sure they give back to their community and they donate fruit to different organizations in the area, such as the Shriners Children’s Hospital in Portland, Ore., the Oregon National Guard Unit in Milton-Freewater, several school districts in the community and food banks in the region.