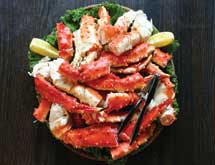 Bob Chinn offers a humble response when asked why he feels his restaurant has been such a success over its long history. “I never gave it much thought,” says Chinn, whose self-named crab house in Wheeling, Ill., celebrates its 30th anniversary this year. “I just work day-to-day and try to make each day better than yesterday.”

Since it opened in 1982, Bob Chinn’s Crab House has become world-renowned for its seafood and mai tais. Among independently owned restaurants, Bob Chinn’s Crab House ranks in the top 15 in the United States in terms of sales. The restaurant serves approximately 2,000 patrons nightly, higher on the weekends. It serves nearly 2,300 mai tais weekly, and more than two tons of fish each week.

At the time of its opening, Bob Chinn’s Crab House seated 250 patrons. Once its reputation grew and two-hour waits nightly became the norm, Chinn opted to expand to 800 seats and opened a second parking lot, and continues to see large crowds. He attributes the restaurant’s continuing popularity to the quality of its food and the friendliness of its employees.

“We buy the best quality food money can buy and don’t mark it up the way other restaurants do,” Chinn says. “Most restaurants work at a 33 percent food cost, but ours is closer to 47 to 50 percent. We want to give our customers a great value to come back to as well as great food.”

When he’s not in his second home in Hawaii, Chinn can be seen conversing with his customers, many of who drive long distances to dine in his restaurant.

“I believe being warm and friendly to everyone is a big plus,” he says. “It’s a simple business – just treat customers like your best friends and buy the best products you can.”

While replicating the success of the restaurant through opening a second location or chain of restaurants would seem to be tempting to Chinn, he says one is the magic number for him.

“I want to enjoy my life and not have to worry about running more than one restaurant,” Chinn adds. “You can’t take money with you when you die, and how much do you really need to be happy?”

Creating a Brand
Chinn, the son of Chinese immigrants, was raised during the Depression. He left high school after only five months to serve in the U.S. Army during World War II. However, Chinn says his education is something he takes seriously, and he spends several hours each day reading trade magazines about the restaurant business.

Chinn’s parents operated their own Chinese restaurant on the north side of Chicago, and Chinn worked in restaurant supply until his parents’ restaurant burned down in the late 1950s. Chinn bought the surviving equipment and opened his own restaurant in the Chicago suburb of Evanston with his wife, Jean. That restaurant later moved to Wilmette, Ill.

By the late 1970s, Chinn had left the management of the Wilmette restaurant to his wife and brother-in-law, and was running another successful restaurant with his brother, Wally. However, Chinn still wanted a challenge. He traveled the Midwest looking at seafood restaurants for research. Armed with the knowledge of the marketplace, Chinn and his daughter, Marilyn, purchased a building in Wheeling and opened Bob Chinn’s Crab House two days before Christmas in 1982.

Aloha Spirit
Several of Chinn’s employees have been loyal to the restaurant throughout its 30 years. One way Chinn rewards employee longevity and hard work is to bring a group of them with him to his second home state.

“I reward about 8 to 10 employees and managers with a trip to Hawaii for a week, and put them up in the best hotel in town,” he says. “The longer they’ve been there or the more frequently they contribute, the better a chance they have of going to Hawaii with me.”

Like their employer himself, Chinn’s employees bring a warm smile and friendly personality to their jobs. “If you don’t have a warm personality, you won’t go far here,” he says. “My employees’ success all comes down to how friendly they are and the relationships they strike up with guests.”