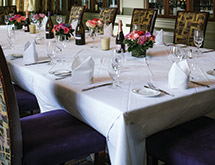 With its roots in carpentry dating back to 1913, Boston Showcase Co. (BSC) is still a thriving family business more than 100 years later. BSC did continue to build showcases for the Mr. Donut chain into the 1970s – when it was purchased by Dunkin’ Donuts – but the company today focuses primarily on designing new kitchens and supplying customers with regular smallwares deliveries. The company prides itself on the ability to serve many roles for myriad clients.

“The company was started 102 years ago by my grandfather, Max Starr,” President Alan Starr says. “He was a carpenter, hence the name of the company, and for 40 years Boston Showcase Co. built showcases and store fixtures, primarily for retail stores. We gradually got into building bars, which led us into the foodservice industry.”

After their service in World War II, Max Starr’s four sons came to work at the company without the carpentry skills that their father had possessed. Naturally, the business model shifted. Max’s youngest son, Jason, graduated Harvard in 1948 and established the university as the first foodservice equipment and supplies account in Boston Showcase’s history, a relationship that still continues today. By the early 1950s, Max Starr had passed away and his four sons’ work was now primarily focused on foodservice equipment and supplies.

In addition to the showroom, Boston Showcase maintains a 35,000-square-foot warehouse for large equipment and stock items, as well as a second facility in Dighton, Mass.

Family Culture
Today, the company is owned and operated by Jason’s two sons, Alan and Jack Starr, and the fourth generation is beginning to move into a lead position with Jack’s son Matthew now in his fifth year at the company. Members of the Starr family have always been true owner/operators, maintaining active leadership roles throughout the history of the business. “We have strong relationships and are able to respond quickly,” Alan notes. “We – the owners – are actively involved, accessible at all times and take phone calls regularly. That’s the way it’s always been.”

Most members of the Starr family have been exposed to the business in some way, even if only with a part-time position. That same loyalty and dedication is what Boston Showcase looks for in its employees. “We are looking for people who are reliable and responsive to our customers’ needs,” Starr says. “It’s rare that someone comes to work here and leaves. We treat them like part of our family. We want people we can count on and they can count on us.”

Boston Showcase currently maintains a 10-person road sales team. The salesforce receives in-house training, as well as training from PRIDE Marketing and Procurement Inc., an Englewood, Colo.-based buying group, of which the company is a founding member. “One of the functions of the buying group is to offer sales training at various locations around the country,” Starr explains. “We like to send our people to those sessions, as well as to factory tours and other training opportunities from various organizations.”

“As a dealer, it is not only our responsibility to specify ENERGY STAR-rated equipment, but also to promote hundreds of other ways to go ‘green’ in a commercial setting,” Matt Starr says.

Boston Showcase always recommends “green” initiatives to its customers, focusing primarily on reducing water consumption and lowering electrical usage. The company also offers the latest in waste reduction technology. “Of course these green initiatives are great for the environment,” Starr continues. “But they can also save our customers an awful lot of money too.”

Expanding its Reach
Boston Showcase has developed a number of long-term relationships over the years, but that does not mean maintaining its clientele has always been easy. Market changes over the past decade have dealt new challenges to the equipment and supplies dealer, including the loss of national accounts that want to buy from a national supplier and the Internet.

“A lot of national accounts that we have dealt with on a local basis have made it more difficult to supply them,” Alan Starr declares. “They want to deal with a national organization. We used to supply lots and lots to the local Hiltons and Marriotts, but we supply very little today because they have to buy through corporate. Instead of buying locally, they buy through a national source.”

The Internet has also been an “inconvenience” to Boston Showcase, Starr admits it has cost the company some clients and definitely eroded its margins. Most of the client base, however, has stayed loyal because of close personal relationships that have developed over the years. The company says most of its new clients come through word-of-mouth and its sales team. “Our salespeople are out trying to develop new customers and we are making an effort to expand our salesforce,” Starr adds. “We don’t have a specific number, but we feel it’s an important part of where we can grow.”

Boston Showcase will continue to focus on expanding its salesforce and servicing its customers to the best of its ability. “We are an old company and are relatively content with modest growth,” Starr says. “We are not looking for huge new markets or expansions in the immediate future. We are focused on doing a good job at what we do now.”