A fresh supply of enthusiasm

A supplier of quality British beef, lamb and pork since 1979, family-owned meat wholesaler Bowland Foods Ltd is blending family values with the exuberance of youth

Despite the growing popularity of vegan food products and plant-based meat alternatives, recent figures suggest that Preston-based meat wholesaler Bowland Foods is performing better than ever. Since 2018, the company’s total sales have increased by 16 per cent, and the pork department managed by Peter Briggs has grown ten per cent, year on year, for the last three years.

“I think the quality and reliability of our product has always been one of the keys to our success,” says HR Manager Hannah Wood when asked how Bowland continues to be successful during a challenging period for the industry. “Everyone knows what they’re getting when they purchase from us, and we go above and beyond to ensure that customers receive exactly what they want.” It’s this level of customer service that helped the company cap a successful 2019 with one of the busiest Christmas periods of its history. “At Christmas, we didn’t let a single customer down,” Hannah states. “I think that’s what keeps people coming back to us, year after year.”

Bowland, whose customers consist of individual butcher shops, the food service industry and secondary wholesalers, is very proud of the strong relationship it maintains with local farms and small businesses. Hannah suggests this is another reason that the company’s customer-base continues to grow. “We are under threat from supermarkets and current food trends, but I think a lot of people are going back to eating locally,” she says. “We are finding that butcher shops still have quite a stronghold within their communities.”

Moving forward
Procuring its pork from the same three farms each week, the company ensures that its product is part of a clear and reliable supply chain. “Consumers care about food waste and food miles,” she says. “They want more transparency about welfare and provenance. This has helped trigger an increase in local shopping which has benefitted us and justified our way of doing things.”

The company may have enjoyed a welcome increase in sales in 2019, but the year was not without its challenges. 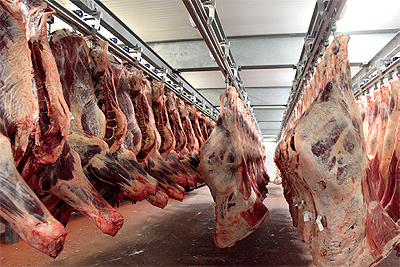 “Two key members of staff retired last year,” Hannah says, before explaining how the company was quick to turn a potentially negative situation into a positive one. “Sometimes change can be good,” she adds, “and it has allowed younger members of the team who have provided us with a fresh set of eyes and new ideas to step up to management positions. Harry Wood has taken over as operations manager – he has been with the business since finishing school. His main focus has been to drive sales increasing turnover and creating new customer relationships.”

Hannah, who joined Bowland in September 2019, believes that this injection of youth has helped to give the business a new lease of life. As well as trying to make new client relationships, the company has recently renewed product specifications and is looking at alternative, more productive ways of working overseen by Peter Palmer, the beef production manager. “We just want to move the business forward,” Hannah says. “The industry changes so quickly that we are just trying to be as adaptable as possible.”

Plans for 2020
The introduction of a new premium product has seen the company attempting to break into new areas of the market, but this doesn’t mean Bowland is forgetting about its current customers. “We’ve been in talks with some of our existing clients to see if we can create specific product lines for them,” Hannah states. The company also plans on expanding its meat processing operations to satisfy greater demand for diced, trimmed and minced meat.

In order to facilitate Bowland’s extensive operational plans, the company will be extending its site in 2020. “The extension will give us more fridge space, as well as the ability to add more production lines,” Hannah says. “We’re hoping to get the plans through in the next couple of months.” The proposals are part of Bowland’s larger aims for 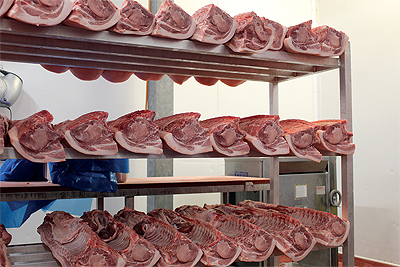 2020, which include increasing production, growing its customer base and encouraging further growth in sales. “We’re all very ambitious,” Hannah emphasises. “I think, as a team, we see a future in this industry.”

With the upcoming expansion and a young team keen to lead the company into the future, Bowland looks well prepared for the years ahead, but after celebrating its 40th anniversary in 2019, the company is not going to forget about where it came from. A family business at-heart, Managing Director Jimmy Wood and his wife, Vikki, still have an active role in the day-to-day operation of the company, Harry and Hannah, their children, are proud of what their parents have built. “We will always keep our roots and appreciate what they’ve made and how they made it,” she says. “The plan is to grow naturally and keep pushing forward.”