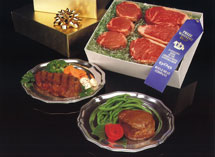 When hungry people think of Kansas City, Mo., they picture mouth-watering slabs of beef and barbecue. Supplying the world with Kansas City filet mignons, sirloin strip and rib eye steaks is Boyle’s Famous Steaks. The company’s reputation for the finest meats is a matter of civic pride – when a Kansas City sports team wagers in a championship with another city’s team, Boyle steaks frequently are in the list of spoils.

As a promotion, the company used to send a steak to every U.S. president from Harry Truman on until security made that impossible. Boyle’s ships aged steaks, cooked and smoked turkeys, hickory-smoked, spiral-cut hams and corned beef worldwide.

“Turkey and ham only comes into play at Christmastime,” says Christy Chester, vice president of the steak division and the last founding family member at the company. “People only tend to send turkeys and hams at Christmas and give hams at Easter, but the rest of the time it’s pretty much the steak. The steaks we sell all year-round.”

The company mainly sells its steaks on its website, by mail order and in gift boxes. It ships them frozen in dry ice. “Mail order has grown and taken over the steak business,” Christy says. “We used to do the steaks ourselves. Now I have someone help me cut the steaks. Strip filets and rib eyes are our most popular. It depends on where you are in the country, and who you are and how you’ve been brought up which cut you like the best.”

A competing company has made a name for itself with retail stores and mail order of steaks. “We could be as big as them, except we’ve always done a quality, not a quantity, business,” Christy maintains. “I’m glad that the new owner kept it that way, because that’s what my uncle was all about always.”

The Steaks Are High
Boyle’s Famous Steaks has evolved with changes in the industry over the years. It used to supply the hotel, restaurant and institutional market. “Throughout the years, it became a hassle serving the little mom-and-pops,” Christy recalls. “They would come in thinking everybody needs to eat, and they wanted to start a restaurant. Then they got into it, and they couldn’t pay their bills. So we said we were going to get out of that part of it.”

The company now is a manufacturer and wholesaler of meat products to major commercial companies nationwide. “We displayed our product, they thought it was a good product, so they started stocking us,” she remembers. “We let them deal with the mom-and-pop organizations now.” Boyle’s obtains its products mainly from Kansas, Missouri, Iowa and Nebraska.

Happy St. Patrick’s Day
The largest percentage of the company’s sales are of corned beef wholesale to commercial customers nationwide and to consumers using mail order by Boyle’s Famous Corned Beef Co. “We’re pretty much the company that made St. Patrick’s Day a corned beef day,” Christy reveals. “Back in 1955, we had this overabundance of briskets and didn’t know what to do with them. It used to be hard to put a pot roast or something on a restaurant menu, and briskets they always considered a little tougher.

“So my uncle and some other gentlemen came up with the idea of, ‘Why don’t we pickle it?’” she continues. “So they started experimenting and pickled a bunch of it and went out and peddled it. People liked it, and so every year they started getting bigger and bigger and started selling it nationwide. My uncle was Irish, and so they started promoting it for St. Patrick’s Day – corned beef and cabbage. It’s amazing how much product this plant puts out for being 55 people – we’re over 4 million pounds of product annually.”

80th Anniversary
Boyle’s Famous Steaks was founded in 1932 by Bob Boyle and is family owned and managed, but not by the Boyle family. Bob Boyle was Christy’s uncle. She adds that she is working on something for the company’s 80th anniversary.