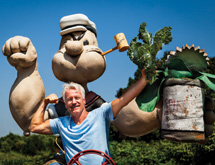 Brad’s Raw Foods founder and CEO Brad Gruno is different from other executives in the healthy snack food sector. He’s not just the guiding force behind the company, he’s also a living testament to the benefits of its products. Five years ago, Gruno was introduced to the raw diet community and starting living off a diet of nothing but raw fruits and vegetables. In just a few months, he says, he lost 40 pounds and found himself completely re-energized. It was that experience that led him to create Brad’s Raw Foods more than three years ago, and today the company is hard at work keeping up with the demand.

Gruno says transforming his lifestyle to the raw food diet wasn’t easy because of what he says is a lack of good information about healthy eating and the overabundance of processed foods. However, the clarity and energy he felt after adjusting to the diet made it easy for him to dive into the snack food market. “That sold me, and it’s very easy to sell something when you’re that passionate about it,” he says. “I’m a true testimonial for what real food can do for you.”

Brad’s Raw Foods produces snack foods like chips and crackers using only raw vegetables and seeds that are dehydrated at temperatures below 115 degrees. Preparing the products at such a low temperature is important for the company’s products because it preserves certain enzymes that contribute to health and well-being, Gruno explains. One of the company’s most popular products is its raw kale, which is covered in a batter made of raw cashews, sunflower seeds and spices and dehydrated to create a light and crunchy snack.

Gruno says the raw snack foods sector is one of the fastest-growing sectors in the food industry at the moment, and Brad’s Raw Foods is carving out a place for itself on shelves at Whole Foods and other retailers. As the company continues to grow, Gruno says, Brad’s Raw Foods can count on its strengths to help it spread the word about its products and the lifestyle they represent.

Ahead of the Pack
According to Gruno, Brad’s Raw Foods’ products stand out from other raw snack foods on the market because of the dedication the company puts into them. While other manufacturers use ingredients like powdered vegetables as a shortcut, Brad’s Raw Foods uses only all whole, real vegetables in its products. In addition, the company currently has the only facility in the raw snack food industry to be certified as using no genetically modified fruits or vegetables in its products.

The company’s raw kale has been a success, but Brad’s Raw Foods continues to develop new products to meet a wider array of tastes and market segments. For example, the company recently introduced a line of onion rings made from raw, chopped onions that are coated in batter made from whole seeds and ground vegetables, then dehydrated. Gruno says the company also recently introduced a line of pet treats made from ground kale stems and other nutritious ingredients. These products were developed after the company was approached by Petsmart at a recent trade show in Las Vegas, Gruno says.

Growing Successfully
The success of Brad’s Raw Foods is an obvious point of pride for Gruno, but it also has been the source of the company’s greatest challenge. As Gruno explains, the company has had to move four times in its brief history into larger and larger facilities to help it keep up with demand. The company’s current facilities in Pipersville and Doylestown, Pa., total 60,000 square feet, and Gruno says he wants to more than double that with its next facility.

Gruno says the company is working to attract private equity investors to provide the capital it will need to continue growing. He says the company also is investigating the possibility of acquiring other raw snack food manufacturers to add capacity and new product lines. If everything works out, Gruno expects Brad’s Raw Foods to double its revenues in the near future.

That’s not all Gruno is excited about, either. He says Random House will publish his book, “Brad’s Raw Made Easy,” in January 2014. The book, which outlines a raw-food cleanse followed by an 80 percent raw-food diet, is another avenue for Gruno to promote the raw-food lifestyle, which bodes well for the future of Brad’s Raw Foods. “We’re really, really excited about it,” he says.