Back to Profile Gallery > Breadsmith Franchising 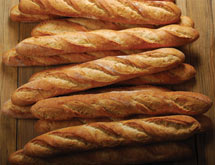 When it comes to expansion, Breadsmith prefers to take a “quality over quantity” approach. “If we can open two stores per year, we’re happy with that,” says Tim Malouf, president of the Whitefish Bay, Wis.-based company. “Most companies want to open as many stores as possible as quickly as possible, but we want to make sure our existing stores get the support they need.”

Rather than heavily advertise franchise opportunities, the company prefers to take a word-of-mouth, grassroots approach to finding store owners/operators. “If someone finds us and is passionate about opening a store, we know they’re committed to the Breadsmith brand as opposed to just wanting to open any kind of business,” he adds.

This philosophy of slow, controlled growth suits the overall approach of Breadsmith, which has a total of 34 stores in 14 states, primarily in the Midwest. The bakery franchise prefers to do things the “old-fashioned way,” and makes its products entirely from scratch. The company specializes in European-style breads as well as cookies, scones, muffins and other baked items.

“Our greatest strength is the fact that we’re doing things in a time-honored way,” Malouf says. “What we do you cannot get anywhere else because we’re not using mixes or baking from frozen – we actually scale and mix ingredients to do what we do.”

All products are made fresh daily in each location, as opposed to a central commissary. Basic ingredients such as flour, water, yeast and salt are all sourced individually, as opposed to being pre-packaged. Breadsmith also eschews the use of dough conditioners, additives or preservatives.

Breadsmith products are baked in stone hearth ovens imported from Europe. Each oven can bake up to 200 loaves at a time and weighs 13,000 pounds. The company imports replacement parts from the manufacturer and sells them back to franchisees, which saves franchisees time and the added cost of having go through an importing company, Malouf says.

Breads and baked goods make up the entirety of Breadsmith’s menu, which suites the company well.

“A lot of bakeries get into the fast-casual space rather than just being a bakery,” Malouf adds. “We feel that it’s hard to focus on baking correctly if you’re also serving sandwiches or soups.”

Franchise Support
Breadsmith franchisees are given a number of resources to guarantee their success. After being awarded a franchise, new owners spend three weeks at the company’s headquarters in Whitefish Bay learning the tools of the baking trade. Baking training is followed by classroom training on the business-related aspects of running a business, such as finances and sourcing, Malouf says.

Once the new store is ready to open, three corporate representatives spend two weeks in the new store training the owner and his or her employees.

Ongoing training and development programs include supporting bi-annual recipe rollouts ranging from eight to 16 new products each year and an annual visit from a technical support staff member. This visit ensures that all products are mixed, shaped and baked to the company’s standards. An equipment specialist also visits each location to perform preventive maintenance on ovens.

Marketing, graphics and operations support are also provided to franchisees. Storeowners are encouraged to participate in community events and fundraisers as a part of the outreach and marketing effort. Community efforts include donating leftover bread to soup kitchens at the end of each day, raising money for school activities and providing bread and baked goods for charity events.

“We look for franchise owners who are passionate about what they’re doing, have a solid business sense and want to be a part of their community,” Malouf says.

Malouf and other top executives in 2012 personally visited each franchise location to meet with owners. “We had the chance to ask what they like and what needs work, and spent time speaking with them about what they needed our help with,” he adds. “This gave us a chance to learn thing we never would have otherwise.”

Past and Future
Breadsmith marked its 20th anniversary in 2013. Company founder Dan Sterling was inspired to start the company after traveling through Europe. “He fell in love with the fact that he could get good bread anywhere there, but when he came back to the United States, he realized there was no place where he could get something comparable,” Malouf says.

Sterling, who earned an MBA from Harvard, traveled the country upon his graduation, trading business advice for bread-baking knowledge. “His goal was truly to make something in the United States similar to what you could get in Europe,” he adds.

Future plans for the company include introducing a new store prototype before the end of 2013. The prototype includes a “bread wall” which customers can examine and choose from before each purchase, as opposed to taking a number and standing in line. “We’re looking for ways to make the in-store experience even easier for the customer,” Malouf says. “We want them to come in and enjoy themselves, not feel pressure to make a decision by the time they get to the front of the line.”