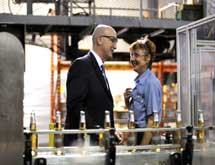 George Croft believes an organization can operate only as swiftly as its management team. Croft and his newly acquired leadership team hit the ground running in 2008, and very quickly lifted Brick Brewing Co. Limited from a strong regional player to a nationwide distributor of beer and ready-to-drink (RTD) beverages, in addition to its already established co-pack business with Canada Dry Mott’s Inc. and Loblaw.

“In 2009, we set out to fix the business, fill up capacity and optimize the operation,” says Croft, who serves as president and CEO. “Within those broad strategies, we set specific goals. To fix the business, we needed to establish low-cost leadership and to date we’ve realized $2 million in annualized operations savings. Our next strategy was to fill up capacity and our purchase of the Seagram RTD business in March in addition to retaining our existing co-pack contracts will certainly deliver directly against this objective, opening the door to every provincial liquor board to expand distribution of our beers. And, finally, [we will optimize] the operation.”

“We’re well on our way to become the first Canadian brewer to achieve certification under the Global Food Safety Initiative, and our performance at brewing industry competitions quantifies for us the high standard of product quality,” added Croft.

When Croft joined Brick Brewing in May 2008, the company was in “significant financial hardship,” according to Croft. The team instantly began working to reverse that trend with its newly acquired fix, fill and optimize strategy.

“The true test of fixing a business is the bottom line,” Croft continues. “We have increased our last 12 months EBITDA by $4.4 million from Q4 2009 to Q4 2011 and greatly improved our speed to market.

“The company has a great respect for hard workers; people who deserve the leisure and small luxuries hard work affords. From employees to our customers, Brick rewards people who apply maximum effort to the task and all they accomplish as a result.

“Our accomplishments to date are made by the dedicated and hardworking people at Brick Brewing Company who help us to prepare to become a more significant player in beverage alcohol,” Croft adds.

Brick Brewing Co.’s products have earned countless awards for taste and quality over the years. The company has been rewarded with over 68 brewing awards within its quarter-century of brewing history.

Canada’s population is aging at a rapid rate, according to Croft. The current market situation and marketing assets suggest a more mature market. Median age in Canada for 2010 was 39.7 years, which is up dramatically from 26 years ago in 1971.

Brick Brewing Co. is responding to this trend by marketing to this older demographic as it begins to reinforce its position within the craft beer and RTD categories.

“The population is buying less, but when they are buying, they are looking for unique and distinctive options,” Croft says.

Products within both the beer and RTD categories include Brick Brewing’s WaterlooTM and newly anticipated Seagram 2012, a blend of vodka, whisky, rum, and gin mixed with naturally flavored lemon, lime, a hint of pineapple and pure spring water.

Along with launching new products, Brick Brewing Co. is marketing its value brands to all Ontario beer drinkers with the addition of a free tall can included with every pack of Laker Lager and Laker Light along with a chance at winning a 2011 Dodge Ram truck.

Croft says the dramatic changes in the beer distribution industry in Canada mean the future is bright for Brick Brewing Co. With so many large foreign-owned brewers holding Canadian market share, he believes consumers are more than ready to drink Canadian-made products.

“We believe that our humble winning attitude, disciplined decision-making, extraordinarily talented people and a handful of great ideas are setting this company upon a rewarding course,” Croft explains. “We will bring this philosophy to our growth plans for our current beer business, the beer opportunities that are in development and the aggressive plans we have for our Seagram Blends.”