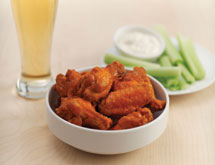 From its birth in a modest kitchen nearly 30 years ago, Buffalo Wings & Rings has come a long way, President and CEO Roger David says. Based in Cincinnati, the firm operates more than 40 restaurants that serve chicken wings and sauces, burgers, salads, soups and onion rings.

Originally, David says, Terry and Ezra Arviv started Buffalo Wings in 1984, and created its recipes in their kitchen. That year, the concept became very popular, and the company’s original location in Cincinnati remains open to this day.

According to David, the process of adding the needed infrastructure included making sure the proper people and processes were in place to support its franchisees. “[We] began with aligning on operational expectations, creating the tools necessary to calibrate those standards and [allowing] easy access to information and ongoing communication,” he says.

But that was the easy part, he notes. “The hard part was finding the talented management team at our corporate office that understands the challenges our franchise owners face every day,” he says. “We got it right.”

Starting Anew
David joined Buffalo Wings in 2009 and since then, he has led the company’s initiative to reposition itself in the marketplace. The market was ripe for a sports restaurant that focused on an elevated wing experience. “It is very clear we’re a sports restaurant first,” he says.

As part of the repositioning effort, Buffalo Wings wants to establish itself as a dining experience that is also family friendly, he says. To do that effectively, you must address all three areas: menu, atmosphere and service. “We very much deliver that sports enthusiast experience,” he says, adding that the restaurants also deliver higher-quality food than is usually sold in the sports restaurant category.

To appeal to sports fans, each restaurant has more than 40 high-definition televisions at its locations that allow guests to watch various events. Buffalo Wings doesn’t hang beer signs or jerseys as decor.

Its new menu features chicken wings with 45 different flavor combinations and a new line of burgers. These include its Big Pepper Burger, which is made with fresh – never frozen – beef and topped with grilled banana, jalapeño and bell peppers, Pepper Jack cheese and paired with fire-roasted salsa.

The company also has focused on a line of salads for health-conscious consumers. “The strategy of this menu is to appeal to the families who have a more mature pallet,” David says. “Salad speaks to the family.”

Going Above and Beyond
Another initiative at Buffalo Wings is the improvement of its customer service. “We have been at it for about a year,” David says. To improve service, the restaurants have established service standards for its employees to follow once guests enter its restaurants and get seated.

“We sat down with our franchisees and found ways to make those moments better for our guests,” he continues, noting that it also looks to find ways where Buffalo Wings could go above and beyond the regularly expected service for its clients.

One example of this type of service occurred recently at its location in San Antonio, David says. When the restaurant’s manager learned that one guest was celebrating her birthday, he went to a bakery across the street and surprised the guest with a birthday cake. “At the end of the day, she told 100 of her friends on Facebook,” David says.

A Broad Background
Before coming to Buffalo Wings three years ago, David gained extensive restaurant, agency and marketing expertise. Previously, he served as the director of strategy at Brand¬image, a brand consultancy firm.

Additionally, David held positions as a strategic director at Lipson Alport Glass & Associates, as a strategist for marchFIRST and as the marketing director for Gold Star Chili Inc., which his family owns. “[They have] a local chain of 100 restaurants,” he says.

David also is a graduate of the University of Cincinnati who holds a bachelor’s degree in marketing and management. He also holds an MBA in business administration from Xavier University, also located in Cincinnati.

He notes that he is proud of his team at Buffalo Wings for enduring the hard task of repositioning the company. “They have really embraced this change,” he says. “Sometimes, my team is moving at a faster pace than me.”

“I’m most proud of the teams and franchisees who have been really important to putting the right approach in place,” he continues. “[We are] as good, if not better, than many of the franchise systems out there.”

To ensure its franchises do well, Buffalo Wings has required franchisees to do calibration reports and created a franchise advisory council. “We’re heading into our second year of that,” he says. “We’ve got a lot of the right things in place to support our franchisees at this point.”

Adapting and Growing
The economic downturn has made business challenging for Buffalo Wings since 2008, David admits. “It slowed down our new store growth,” he says. In addition, the recession led to the increase in the costs of ingredients like chicken.

With chicken costs at a new high, Buffalo Wings has adjusted its prices so it stays profitable in 2013. “We’re going to [look] in the first quarter and see if we need to do it again,” he says.

Despite the challenges, he predicts future growth for the company. “I think at this stage, we’ll continue to grow at about 10 to 15 percent in unit count,” he says, noting that Buffalo Wings plans to grow methodically.

“We don’t have a lot of pressure to grow more rapidly, unless some extraordinary event takes place,” he says. “With 32 consecutive quarters of same store sales growth and 14 percent average annual unit volume growth for the last eight years, Buffalo Wings & Rings continues to be player in the casual dining segment.

“2013 looks great for us,” he says, noting that it will open prototypes of new stores in the Cincinnati market. “We will have two new company owned stores late in 2012 and four to five new franchised locations in the first half of 2013.”