Back to Profile Gallery > Caduceus Cellars 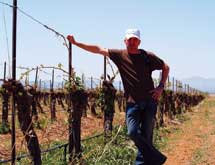 Musical front man for the prog rock bands A Perfect Circle, Tool and Puscifer, Maynard James Keenan also is spearheading efforts to elevate Arizona wines in the minds of wine connoisseurs worldwide and to champion his own wine label, Caduceus Cellars.

“We’re such a small, growing industry,” Keenan points out. He concedes that not much Arizona wine is being distributed outside the state’s borders. “This is definitely one of those industries that is about baby steps, and the truth is in the bottle,” Keenan insists. “Once we’ve established a profile for a bottle, you can taste Arizona in the bottle. You can’t fake that.”

Arizona is in every grape that Keenan grows in his vineyard in the charming, former mining town of Jerome, Ariz., whose narrow, winding streets hang scenically on the edge of a mountainside. He broke ground for his winery in 2002 and planted his first vines in 2004. His first vintage, labeled Caduceus Cellars (a mythological reference to the staff carried by Mercury, the messenger of the gods), was produced in 2005.

“I initially started making it as a custom crush to get my feet wet,” Keenan says. Wineries offer custom crush services to beginning vintners who have not acquired winemaking equipment and may not have their own vineyards. The wineries prepare the wine according to the vintner’s directions.

“As of four years ago, I’ve been making the wines all by myself,” Keenan says. “My wife, Jennifer, does all the lab work, and I make all the wines. We have a friend of ours who comes by and basically cleans up after me. It’s a two-person facility with a maid – a very tall, strong maid.”

Keenan produces up to 4,000 cases annually of high-elevation wines in a 2,500-square-foot cement facility that is called the bunker because it is mostly underground. Caduceus offers a full cellar of white through red wines, labeled dos ladrones, nagual de la naga and paciencia, primer paso, le cortigiane oneste, Anubis, kitsune and sancha. Currently, he grows grapes on 5 acres, recently planted an additional 28 acres and expects by 2016 to have approximately 40 acres of producing wines in northern Arizona.

Additional wines are available exclusively to members of the winery’s Velvet Slippers Club (VSC). VSC members are eligible to pay from $70 to $250 quarterly for each three-bottle shipment of wine, many of which are special varieties unavailable to the general public.

Blending Grapes
Keenan blends grapes from all over the state and tri-state region of Arizona, New Mexico and California. Previously, he sought out California grapes. Today, Keenan mostly relies on New Mexico for any additional grapes he needs because that state’s grape’s flavor profile is much closer to Arizona’s than is California’s.

“New Mexico is far more in line with what we have in Arizona,” Keenan says. “It’s a shorter drive right across the border from southern Arizona. California is a whole different beast.”

Keenan emphasizes that Arizona vintners are moving forward and not cutting corners in their production. “It doesn’t help any of us,” he stresses. “It actually hurts us. If you try two Arizona wines and both are awful, you’re never going to go back.”

The state of Arizona has realized the money it can earn from a healthy wine industry and the jobs it can provide, so it has taken steps to support the industry. “We’ve had Arizona commerce department grants going out to a number of facilities this past year,” Keenan says. “They awarded a half-million dollars to the wine industry for economic stimulus. That’s pretty huge.”

The First Time
What made Keenan decide to augment his musical career with winemaking? “Wine in general has always intrigued me,” he concedes. “For me, I had a moment when I had a wine that turned me on to wine in general. Prior to that, it was more the social aspect of it, and the weekend barbecues, and cooking with friends – that kind of thing. There was a moment when all of a sudden I thought I understood wine, at least where I was going to go with regard to appreciating it more than just being an accompaniment to dinner.”

The wine that was responsible for that epiphany was from Silver Oak winery, which only produces Cabernet Sauvignons. “That was the wine,” he confirms. “That’s probably the gateway drug for most Americans. We were raised drinking Mountain Dew and eating red licorice. There is such a big palate attached to Silver Oak back when I first had it.”

Silver Oak was a dry red that made Keenan think he was understanding wine. “The next level of that was a few years later,” he recalls. “That was what got me into wine. But then again, a few years later, I had a couple bottles that made me want to make wine.”