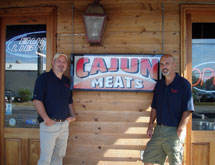 The continuing demand for authentic southern Louisiana fare has inspired many producers to attempt to gain market share in this competitive category. However, Carl Broussard, president of Cajun Specialty Meats Inc., insists that what sets his company apart from the competition is the quality and consistency of its products.

“Our quality and consistency distinguishes us from our competitors,” he says. “Strict adherence to our third-generation family recipes, and production and sanitation standards that exceed USDA and FDA requirements, assures our customers that they are getting the very best products on the market.” The products manufactured by Cajun Specialty Meats may have originated in its hometown of Maurice, La., but Broussard and his brother, Vice President Cory Broussard, launched their business in Pensacola, Fla., in 1996.

Today, Cajun Specialty Meats produces authentic South Louisiana-style cuisine out of a 20,000-square-foot facility with 18 employees. The company specialty is the “turducken” – a whole semi-deboned turkey stuffed with a deboned chicken, a deboned duck, Cajun pork sausage and Cajun-style cornbread dressing. The company also took this craze to a new extreme with the creation of the “Fowl de Cochon,” which is a boneless pig stuffed with a Turducken and filled with cornbread dressing.

“We introduced the Internet to the turducken in 1997,” Carl Broussard says. “Since then, the web has gotten extremely competitive as resellers have entered the market. The key to our success comes from the fact that we are always striving to make sure we remain true to our family’s core beliefs of providing consistent, high-quality products and outstanding customer service.”

Along with the variety of turducken styles, Cajun Specialty Meats also sells whole deboned stuffed chickens and turkeys, pork and sausage, as well as a line of heat-and-eat gourmet Cajun-style entrees and sides. The diverse line of products allows the company to cater to both foodservice and retailers.

It may seem like an odd place to launch a Cajun food company, but the Brous­sards knew what they were getting into when they opened Cajun Spe­cialty Meats in Pensacola. Carl Brous­sard says the siblings were familiar with the area after vacationing there for decades.

When looking for a location to launch Cajun Specialty Meats – which originally started as a retail business – the pair knew they had to find a region that had a strong Louisiana connection. With its proximity to the Gulf Coast and the large number of Louisiana “transplants” in the area, the brothers realized Pensacola was the place to be.

“Since we vacationed here often with our parents and then later with our own families, we knew this was a great area to start and grow a business,” Carl Broussard says.

Around 2000, the company shifted focus from the retail segment to wholesale, and the business began growing exponentially. Carl Broussard says between 2003 and 2006, Cajun Spe­cialty Meats averaged 28 percent growth year over year. Even through the recession, it is still growing between 8 and 9 percent annually.

Although the wholesale business accounts for the majority of revenues for Cajun Specialty Meats, the company is diversified in a variety of business lines. Broussard says the producer still has several retail components including a market and restaurant along with the mail-order/Internet revenue streams.

As Cajun Specialty Meats celebrates its 15-year anniversary, it isn’t done growing, either. Broussard says the company is presently searching for distributors that can expand its reach beyond the southeastern United States. He believes specializing in turducken will continue to carry the brand, as well.

“While we continue to increase our national presence through the web, the wholesale markets are where the majority of our growth is coming from,” he says. “I don’t see turducken as a fad. It has been around long enough that it is engrained in the market, and I see a whole lot of future potential [there].”