Back to Profile Gallery > Cameron’s Coffee 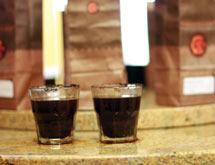 For many people, coffee isn’t just a beverage – it’s the keynote for their entire day. A good cup of coffee can mean the difference between an average morning and a great morning, so that’s why Minnesota-based Cameron’s Coffee puts so much hard work into making sure its coffee is the best available. President Bill Kirkpatrick says the company understands that it takes more than just the freshest and best beans to make a good cup of coffee, and that’s why the company invests heavily in having the best equipment in the industry.

The company was founded in 1978, and Kirkpatrick purchased it from founder Jim Cameron in 1999. Since then, the company has experienced massive growth, with annual revenues rising from $13.5 million in 2010 to more than $40 million expected this year. The majority of the company’s products are made for the retail grocery market, and includes premium flavored coffees, teas and powdered cocoa and cappuccino mixes.

Kirkpatrick says Cameron’s Coffee’s devotion to quality is virtually unmatched in the industry, and has been the single most important element of its success over the past several years. The coffee market may be one of the most crowded in the retail beverage industry, but Cameron’s Coffee believes it has more than enough advantages to make it stand out from the rest.

The Right Blend
The company’s quest for the perfect cup of coffee begins with the beans. It says it seeks out only beans grown at the world’s finest plantations, usually grown at a high altitude. Because the beans are grown at more than 4,000 feet above sea level, they mature slower and stay on the tree longer, the company says, resulting in a bean with denser flavors and less acidity.

The quality of the beans is only part of the formula, however. Kirkpatrick says Cameron’s Coffee has made significant investments in its roasting facility and equipment to ensure that those high-quality beans are prepared and packaged to the highest standards. The company built a new, state-of-the-art roasting facility a few years ago, and Kirkpatrick says he spent months visiting various facilities around the world to learn the latest and most effective practices. He says the management team did not skimp when it came to ensuring the facility had the best possible equipment.

“When [management] came to me and they wanted the budget for some very expensive items, I said ‘yes’ to all of them,” Kirkpatrick says.

The company’s facility uses European-style drum roasters, which have been customized to eliminate burnt coffee. Its precision grinders create a perfect level of coarseness that prevents the coffee from becoming too bitter or too weak. On the packaging side, Kirkpatrick says the company’s dual nitrogen-flushing system eliminates more than 99 percent of oxygen in bags to preserve the coffee’s freshness for as long as possible. He says Cameron’s Coffee bags are the sturdiest on the market.

“What it really means is that the bag isn’t going to leak, because as soon as your bag leaks, the coffee goes stale,” he says.

Kirkpatrick says it also was important for Cameron’s Coffee’s new facility to be one of the greenest in the world. The company also has a line of sustainable and eco-friendly coffees.

Moving Forward
Kirkpatrick says the corporate culture within Cameron’s Coffee is a major component of its success. He describes the company’s culture as “very open” and says each manager is encouraged to be a cheerleader for his or her staff. Kirkpatrick says the company’s culture will help Cameron’s Coffee stand out to potential employees as it expands further in the future.

The company also has success keeping up with the latest trends in the coffee world. For example, the rise of single-serve coffee makers prompted Cameron’s Coffee to introduce its own line of single-serve coffee cups, and Kirkpatrick says that line runs 24/7 to keep up with the demand. He says the company plans to introduce a biodegradable cup to that line in the near future because more than 10 billion of the plastic single-serve cups are produced worldwide every year. “Those little tiny cups add up,” Kirkpatrick says.

The rapid growth of Cameron’s Coffee in recent years has meant the company already has reached its current capacity, Kirkpatrick says. As such, the company is looking to either build or acquire a new facility to give it more capacity to keep up with demand. He says the company has its sights set on the western United States, but however Cameron’s Coffee responds to its growth, it’s clear the company is only just getting started.