Back to Profile Gallery > Canplas Industries 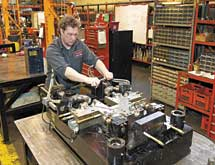 When people go into restaurants, they often don’t look behind the scenes and see the little things that help keep things running smoothly, like plumbing. But that is one of the areas where Canplas Industries focuses its work. Based in Barrie, Ontario, the company manufactures injection-molded plumbing, ventilation and central vacuum products for the construction industry. Its plumbing products, specifically, are often sold via distributors to clients in foodser­vice.

Canplas started operations in 1966 in New Westminster, British Columbia, with two injection molding machines and 12 employees. Since then, the company has transitioned to Central Canada, and now employs a staff of more than 200 across five locations in North America.

On the foodservice side, Canplas focuses on repair and replacement business, again servicing a breadth of clients from chain restaurant locations to “mom-and-pop-type restaurants,” Business Dev­e­l­o­p­ment Manager Andrew Bird says. Many of these customers will buy their equip­ment at the most convenient location and have a plumbing contractor install it.

The most popular product in the food­service market for Canplas, Bird notes, is the Endura Grease Interceptor. “The foodservice route to market has grown to represent the largest portion of the products we sell in that area,” Bird says.

Bird, who joined Canplas in 2006, says one of the drivers of the company’s success has been its ability to stay innovative in its product offering. For instance, with its plumbing products, Canplas has always tried to find ways where it could address everyday problems in the field. The Endura Grease Management line is a clear example of this, taking the iss­ues and challenges associated with the operation and use of traditional metallic grease traps, addressing each one in turn and incorporating the solutions into a new plastic solution with imp­roved durability, performance and longevity.

Recently, he says, Canplas has started looking at improving other areas within the company, including communications. One step the company is taking will be the launch, in early 2011, of new coordinated websites for all of the Canplas brands. This is a major undertaking for what was traditionally a B2B manufacturing company selling mature, commodity products.

“We also are trying to promote conversations between Canplas and its users, as well as trying to draw in people that are using competitors’ pro­ducts,” he says. “We’re trying to bring them in and understand what kind of features and benefits they’re looking for, what installation issues they face, and in that way, gain greater insight.”

In the past year, Canplas watched its business shift due to the downturn in the economy, Bird says. The company’s share of the homebuilding market in the western United States experienced the worst blow, with a drop in market activity of nearly 60 percent. “It’s been extremely difficult in the U.S. market,” he admits. “2009 was tough for all, and we were no different than anyone else.”

However, the company has turned this situation into a positive by con­solidat­ing strategic efforts on the Canadian market. In addition, Canplas has seen a recovery with many new products and services it introduced in late 2009 and into 2010 as a result of strategic projects focusing on both infrastructure and product development.

Canplas is feeling optimistic about its future, Bird says. He notes that the com­pany will soon shift its focus back more to product innovation. “Devel­op­ment of differentiated products is now and will continue to be a significant part of our business going forward,” he says.