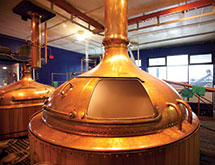 Back when Capital Brewery Co. Inc. was founded in 1984, microbrewing beer was still a new idea. Nearly 30 years later, the company is still in expansion mode, adding new facilities and brews to its burnished legacy. Publicly rather than family owned, Capital Brewery produces an estimated 25 beers, some of which are seasonal, for limited release or “brewer’s choice” brainstorms – unique brews that may never be produced again.

“Our most unusual is probably Jobu, a brown ale aged in Jamaican rum barrels,” recalls President Scott Wiener. “Every couple months, someone in brewing or sales will have an interesting idea. They pitch it, and we decide if we should make it. We also have a small batch brewing system that is 2.5 barrels. So sometimes we just do experimental beers that might be exclusively available in our bier garten or bier stube or at key accounts.

“We have the largest and most popular bier garten in the Midwest,” Wiener declares. “We open when it warms up, usually at the end of April, and close it in mid to late October. On a typical Friday night, we have over 1,500 people come visit, bring their families, listen to music, eat food and drink beer.”

The company has never been tempted to serve food or open a brewpub. “We’re not in the food business – we’re in the beer business,” Wiener points out. “We work with local food vendors that serve a wide variety of food, including barbecues or rotisseries, brats, burgers or pizza. We often work with nonprofit organizations, hosting fund-raisers where food is sold to benefit the charity. It’s good for our customers. They eat, they drink, they stay and listen to the music – it’s a win-win for everybody.”

The rest of the year, guests can enjoy Capital beers in the brewery’s bier stube, which resembles a pub and includes a Brunswick back bar, reportedly from a former speakeasy in Chicago.

Say Yah-hey to the Lager
In a state that was settled by many German immigrants, Capital Brewery has made its reputation on the German tradition of brewing. It has won more than 200 awards in the past 28 years. In 2014, the brewery’s Oktoberfest beer received a gold medal at the Great American Beer Festival in Denver. At the 2013 World Beer Championship, Capital Brewery’s Munich Dark and Special Pilsner lagers – among the first beers brewed by Capital – each won a gold medal.

Wiener calculates that the 28,000-square-foot facility in Middleton, Wis., brews approximately 30,000 barrels of beer, but that figure fluctuates whether lagers or ales are being brewed. “Ten years ago, we were probably 95 percent lager and 5 percent ale, and lagers generally take longer periods of time,” Wiener explains. “You can make an ale in two weeks – it takes three to five weeks for a lager. Now we’re 60 percent lager and 40 percent ale, and that effectively has increased our capacity, which is an added benefit.”

Capital’s Supper Club and sometimes Wisconsin Amber are brewed at the Point Brewery in Stevens Point, Wis., to meet demand. The rest of Capital’s beers are brewed in Middleton, but only those in 22-ounce “bombers” are bottled there. Any beers destined for 12-ounce bottles or cans are shipped to Stevens Point in dairy trucks and bottled or canned there.

An exception is the 16-ounce cans, which are canned in Middleton by a company that transports mobile equipment to Capital to can a brew and then move on. “We’ve been in cans since 1997,” Wiener asserts. “Another brewery claims to be the first craft brewery in cans. Every time I see that, I give them a call.”

Female Brewmaster
The brewmaster is to beer drinking what a chef is to fine dining. “We just recently promoted someone who had been assistant brewer to the position of brewmaster, and her name is Ashley Kinart,” Wiener says. “She studied at the Siebel Institute in Munich, Germany, has a degree in biology and has been brewing for a long time. We hired her a little more than two years ago, and she rose through the ranks.

“We’ve promoted Brian Destree, our previous brewmaster, to director of operations, so he still oversees the brewing process,” Wiener continues. Destree has degrees in biochemistry and chemical engineering from UW – Madison and studied at the University of California – Davis. “That course at UC Davis is probably the most prestigious university brewing course in the United States,” Wiener maintains.

Capital’s beers are distributed in Wisconsin, Minnesota, Illinois, Iowa and Florida. For the future, Capital plans to open a 40,000-square-foot brewery on a 9-acre site in Sauk City, Wis., hopefully by the third quarter of 2015. It is designed to produce up to 100,000 barrels annually and will have its own bottling and canning line.

“This will give us the opportunity to grow into different markets and be masters of our own destiny,” Wiener says. “The facility in Middleton will be repurposed into more of an entertainment venue, and we will do more special events and private events, such as wedding receptions, award ceremonies for local companies, graduation parties, things like that.”

The entertainment aspect of the brewery will be suited to the residential area that has grown up around it over the years, as well as a city of Middleton project to convert the street around the Middleton brewery into a European-style arcade and festival zone.

“We were more than happy to cooperate with the festival zone,” Wiener explains. “It’s a unique area where they’ve used colored and stamped concrete to look like brickwork and put in unique lighting and bike racks and things like that to actually increase the entertainment presence and value of this area.”

A dedicated bicycle lane will be included in the planned mini-mall terrace, as well as a skateboard park directly across the street from Capital’s bier garten.

The brewery also will be suited to the emerging vacation trend of beer tourism. “There’s a huge growth in beer tourism,” Wiener reports. “People will actually go somewhere to tour the breweries. They’ll go to a destination city and go to three or five brewery tours, winery tours or cheesemakers and make an entire vacation out of it. It’s really become kind of a unique niche. People often say they are ‘going to the wine country,’ some people now go to beer country. It’s an interesting twist on that.”