Back to Profile Gallery > Carib Brewery 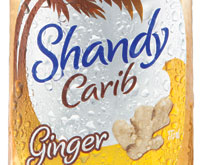 “Being the first brewery has always helped in establishing Carib Lager as the local beer,” Global Brands Director Douglas Henderson explains. “But moving forward, it has been the strength of the brand that has allowed us to grow.

“Carib beer is sold in 29 countries around the world and the majority is within the Caribbean region,” Henderson adds. That is our strength and why we take the position as a real Caribbean beer.”

This year, the brewery, which manufactures and distributes 17 beer brands, has stepped up its efforts to make sure its 62-year-old flagship Carib Lager is not forgotten as the original Caribbean beer.

“We came out this year with a new campaign to reposition it as the authentic Caribbean beer,” Henderson says. “What we’ve seen is that over the years, we have gotten away from that, but we saw that as a core message that we need to get back to reinforcing for our customer base.”

Caribbean Clout
That goes for its current and future customer base. The company, with breweries in St. Kitts & Nevis, Grenada and Trinidad, wants its products to be known in the rest of the world just as it’s known in its home base – as a true Car¬ibb¬ean product.

Its most popular markets reside in its areas of operation, but also in other Caribbean countries such as Barbados. Its largest export market in Guyana is a South American country with strong Caribbean ties. However, Carib also exports to non-neighboring countries such as Sweden, the United Kingdom, Canada and the eastern United States. Before the economic downturn in Greece put a damper on exports, Carib beer was the summer beer of choice for the region.

Henderson explains that Carib has its sights set on expansion and growing in these non-Caribbean markets, but it must first take care of business at home.

“If we want to posture ourselves as a real Caribbean beer, then we need to have a very strong Caribbean footprint,” he says. “For the last five years, we have grown export sales by over 80 percent and that has primarily been in existing markets.

“We are working very hard to strengthen our position within existing markets primarily within the Caribbean and really making sure that when we go outside of the Caribbean and talk about Carib being real Caribbean beer that we are doing so from a position of strength that can be validated by any traveler,” Henderson adds. “So in Antigua, Barbados, St. Lucia and St. Vincent, all these islands, we’ve been looking to improve our strength and market share.”

Its 2012 campaign as the authentic Caribbean lager along with a strong increase in exports to Caribbean neighbors puts the company in a confident position to send the same message to the rest of the world. It has a strategy of natural progression that will help it break into new consumer bases.

“Also, when we look at Central Am¬erica, all the countries there are Spanish-speaking except one, which is Belize,” he continues. “Belize is the one market which is English-speaking and considers itself more a part of the Caribbean than it does Central America. It was a feasible entry into the Central America market to establish our foothold.”

Mackeson Moves In
When Carib expanded into Belize, it took with it Carib Lager and its recently acquired brand Mackeson Triple Stout. The milk stout, with origins in Britain’s touristy Hythe, Kent region, is known as a not too sweet, not too bitter and full-bodied stout. Before buying the brand, Carib held a license to manufacture and distribute Mackeson in the Caribbean region.

“We brewed it under license for a while and because of the growth that we’ve seen with Mackeson being in a number of our Caribbean markets – we were head to head with Guinness sharing up to 50 percent of the market with Guinness – we just believe this brand could globally, in time, be the No.2 stout brand in the world,” Henderson says. “It’s ambitious for a small brewery to think like that, but that’s what we believe the brand could do. We’ve seen tremendous growth in the last five, six years in various places.”

Carib Brewery has this faith in Mackeson, Carib Lager and many of the other brands it manufactures, and not just as a brand owner, but as a Caribbean-based licensed manufacturer and distributor of other brands, as well. The company has longstanding relationships with Heineken as well as Diageo, which owns a number of brands such as Smirnoff and Guinness, and believes that working with these international corporations brings great knowledge to Carib and vice versa.

Growing Relationships
“These relationships we do want to strengthen because there are mutual benefits,” Henderson explains. “We like to think that nobody knows the Caribbean as well as we do in terms of how the market and distribution networks work here.”

These and other partners also can rest a bit easier knowing their brand is in the hands of a company that invests in its operations. In January, Carib Brewery announced it would bring a new technologically advanced brew house on line. The facility is up and running and the company is installing three additional storage tanks that will be commissioned within the next two to three months.

The additional space will help Carib Brewery keep up with demand for brands such as the Shandy Carib – Carib’s flavored beer line that claims the United States as its second largest market outside of Trinidad.

It also will help as the company delves into evolving markets such as light beer with Carib Light. The light beer market may be in full force in the United States, but Henderson says it is still in the nascent stages in the Car¬ibbean. However, the brewery wanted to set the standard as the Caribbean originator in light beers, just as Carib Lager set the stage for Caribbean beer back in the 1950s.

“I am very optimistic for Carib,” Henderson says. “I think we are one of those breweries that has a great story to tell. We may be small, but we believe we can do big things and the team here is dedicated to that. The biggest thing we need to have is patience.”