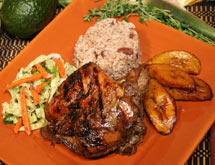 Comfort food is a little different for everyone, but when looking for a comforting meal, most people want food they grew up with, a dish that their mother made for them or a traditional offering from the region of the world during which they spent many fond years. Vincent and Jeanette HoSang understood this desire well, and when they migrated to the United States from Jamaica in the late 1960s, they believed it necessary to introduce the tastes of Jamaica to their new home in New York.

With a desire to bring traditional Jamaican patties to America, the HoSangs opened Royal Caribbean Bakery and its affiliate, Caribbean Food Delights in 1978. Not only did the HoSangs’ creations bring the comforts of home to other Jamaicans who had moved to New York, but they also introduced the flavorful tastes of the islands to Americans who never experienced the unique blends of spices and traditional Jamaican dishes before. With a dedication to authentic, quality offerings, Caribbean Food Delights has become the largest manufacturer of Jamaican frozen food products in the world.

“Over the years, we have found that people are loving our products more and more,” Chief Operating Officer Sabrina HoSang explains. “We’ve put so much back into improving our products – we do all we can to ensure our products continue to please our customers.”

Caribbean Food Delights’ products include Jamaican-style beef, chicken and vegetable patties – a flaky, half-moon-shaped pastry or turnover that is baked and filled with meat or vegetables – as well as Jerk chicken wings. Out of its state-of-the-art facility in Tappan, N.Y., Caribbean Food Delights is continuously developing new quality products to entice the Jamaican and American palates.

A Successful Spin
Caribbean Food Delights’ newest products were launched in September 2012 in Wal-Mart in Florida and Georgia, under the name, Sabrina’s Delights. These products were created in-house and were named after Sabrina HoSang, the HoSangs’ older daughter. She explains that this new line of products – chicken, beef and turkey pot pies, as well as apple cinnamon and western omelet fillings in a flaky pastry crust – were created to be more American than the company’s traditional Jamaican offerings.

“Sabrina’s Delights products are selling extremely well. In the first week that the product hit the shelves, they were all sold out without any marketing,” HoSang says. “The customer comments on our Facebook page were very encouraging, but the demand outweighed the supply, and some customers were left disappointed when their local food stores were sold out of the products because they are so popular. Since then we have managed to meet the demand.”

Caribbean Food Delights’ most popular product overall is the spicy beef patty, but the Sabrina’s Delights products came as the result of working with its retail partners to create other popular goods. “We’ve expanded these products to stores in South Carolina, North Carolina, and Texas and we’re also selling them through our online store, www.shopcfd.com,” COO says. “We took them to the South East Petro-Food Expo in Myrtle Beach in South Carolina and after tasting several products, many people rated Sabrina’s Delights the number one product at the entire show!” Due to the increased popularity, Sabrina’s Delights will be in many new markets domestically and internationally by the end of the year.

The company has developed new flavors such as chicken Parmesan, sausage and peppers, loaded baked potato, broccoli and cheese, and spinach and cheese varieties. Sabrina’s Delights also offers a plantain tart to its institutional customers, along with the other flavors. All of the Sabrina’s Delights products are trans-fat free.

Safety and Efficiency
Understanding that quality products are the result of a quality operation, Caribbean Food Delights continuously works at optimizing its food plant efficiency and safety measures. These measures ensure that the company’s 103,000 square-foot facility operates in an efficient quality control environment. In 2010, the company received Safe Quality Food Institute’s, SQF certification Level 3, which is the highest level possible with SQF. With this qualification, SQF testifies that Caribbean Food Delights upholds good manufacturing practice regulations, adheres to the principles and application of Hazard Analysis and Critical Control Points (HACCP) system and maintains food safety fundamentals which are essential to ensure the safety and suitability for consumption. This makes Caribbean Food Delights one of 10 USDA plants that are at Level 3 and the only Jamaican frozen food manufacturer that is SQF Level 3 certified in the world.

“We go above and beyond to make sure our products are produced to the highest standards to achieve the quality and taste that our customers love,” HoSang says. “SQF is a standard that is recognized internationally and all of the hard work is really worth it. Once you are at Level 3, you can’t go down to a lower Level, so you are either in it or not at all.”

“We continue to improve our products because we want to give our customers the best products available,” she says. By improving its operations, Caribbean Food Delights is more efficient than ever. “With the machines we have, we can produce over 40,000 patties an hour,” HoSang says. “We have become so efficient that now we need more stores to supply.”

Healthy Environment
Caribbean Food Delights believes the most important part of a quality operation is its employees, so it has been dedicated to ensuring it has a quality environment in which its employees spend their days. To achieve this, HoSang herself encourages and promotes health and wellness among her employees. To take it further, she is trained in CPR and first aid along with three managers to make sure the employees get immediate care when needed.

In beginning of 2012, she created a gym for the workplace after receiving a $7,000 grant from the Rockland Alliance for Health to purchase equipment. Caribbean Food Delights facilitates exercise and nutritional programs such as zumba classes, Lose-to-Win educational seminars and Biggest Loser Contests, and purchases fruits every week for its employees.

The company has also added water coolers, switched to healthier snacks in its vending machines, created a walking path outside of its facility for employee use, and publishes healthy tips in the company’s newsletter.

“Many employees have told me that by working out more frequently and eating healthier, they have more energy and are sleeping better,” the COO says. “My sister, Simone, is our Director of Nutrition and Food Science who gives free health advice to our employees to help them with their health goals.”

In March 2013, the company received an additional $6,000 for more gym equipment to accommodate more employees using the gym.

Philanthropy
On February 15, 2013, Caribbean Food Delights celebrated its 35th anniversary, and because of customer loyalty and support over the years, the company is doing all it can to give back.

“We believe in supporting the community that supports us and helping the less fortunate,” HoSang says. Her family’s charitable organization, The Vincent HoSang Family Foundation (VHFF), have embarked on a project initiative to raise $5 million this year to purchase two linear accelerator machines which will be donated to hospitals in Montego Bay and Kingston, Jamaica, West Indies.

Another major event the company sponsors is the Penn Relays at the University of Pennsylvania in Philadelphia. This is the largest annual track and field meet in the United States and the largest relay meet in the world. Caribbean Food Delights feeds the Caribbean athletes, and this year, 500 students from 33 Caribbean schools attended the event. HoSang notes that this year is the 19th year and the company fed Usain Bolt before he became a worldwide track and field superstar. HoSang adds, “Without our customers’ continued support, philanthropic efforts like these would not be possible. We are very grateful for the support we receive from the community because they help us make a positive difference in many people’s lives.”