Back to Profile Gallery > Carolina Bison 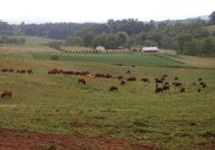 Nutrition and health go hand-in-hand. The old data maxim, “Garbage in, garbage out,” also applies to people’s health. It is with this in mind that Dr. Frank King Jr. founded Carolina Bison in 1985. “Nutrition plays a big role in health – that’s what led us to raising the American bison,” Dr. King says. “I read a research study done by a global committee on fats.

“This study showed bison having less fat than most fish and half the calories of beef. That caught my attention.” A doctor of naturopathic medicine and a chiropractor, Dr. King found that his patients with high cholesterol who were not being aided by the drugs for that condition were helped by making bison their primary red meat source. “We found this lowered cholesterol and triglycerides better than the drugs were doing,” Dr. King declares. He also maintains his patients’ overall health and resistance to illness improved.

Dr. King started a pharmaceutical company in Asheville, N.C., to sell homeopathic drugs when he could not get them manufactured to his specifications for his health practice in Ohio. He had gone to the Blue Ridge Mountains of North Carolina on a sabbatical from his medical practice and the family-owned, fourth-generation Angus beef farm in Ohio to research the pharmaceuticals. During his research, he decided to stay and establish separate pharmaceutical and bison companies there.

“My brother says I’m committing meat adultery,” he jokes. He and his son Frankie King III, COO of Carolina Bison, stress that Native Americans whose primary meat source was bison lived long, healthy lives, and that bison is America’s native red meat – a fact the company is in the process of having trademarked as its slogan. In contrast, the American bison continue to breed such a strong genetic makeup that they are free of cancers and other diseases that often plague cattle.

“Wild foods carry a quality to them genetically that we don’t get in our domestic breeds that is far superior to what we as humans have done in altering their breeding for thousands of years,” Dr. King maintains. “We’ve lost qualities we weren’t aware of in doing that. The bison still have those qualities.”

Once 60 million strong, today’s bison are descendants of herds that were slaughtered and reduced almost to extinction during the expansion of the United States in an effort to drive out the Native Americans. Today, the American bison are again being recognized for their health benefits and their numbers are growing. To ensure the reestablishment and proliferation of this magnificent beast in today’s American society, Dr. King has taken an active role in widening the bison’s gene pool by selecting only gold and silver champion bison to start the herd that became Carolina Bison.

“One of our bulls was helicoptered out of a big ravine where they never took live animals out at the Crow Indian reservation,” Dr. King reports. “We’ve also crossed woods bison in Northwest portions of Canada with our plains bison here, as well. By hand-selecting, DNA-testing and blood-typing bison, we’re able to help diversify the genetics and bring back a very healthy and strong breed of bison.”

Carolina Bison produces approximately 600 head of grass-fed bison annually using natural techniques without hormones or antibiotics on a ranch outside of Asheville that is several hundred acres in size with free range to roam. They drink mountain spring water and in some cases graze on specially planted types of grasses and plants that improve their health and flavor.

“What type of grasses they’re eating can bring out a really key quality of the meat if they’re eating the right species of grasses – we’re very particular on the unique mixes of grasses,” Dr. King maintains. He estimates the bison’s diet is 95 to 98 percent grasses. They are finished with grain, some of it spent after fermentation at local breweries.

“We do use some of the beer mash that has no alcohol in it, of course,” Dr. King points out. “The hops are from local farms. The local breweries are big on using local farms. It’s organic.” King III estimates nearly a half-dozen breweries are in the Asheville area. “The New York Times recently listed Asheville the No. 1 city for local breweries,” King III asserts.  The Blue Ridge Mountains where the bison graze are more than 3,000 feet above sea level, and Dr. King feels that helps the bison the same way it creates more red blood cells in athletes training at elevation.

Currently, Carolina Bison sends its animals to other USDA facilities for processing, but it is writing a grant to investigate development of portable facilities to kill the bison in the field without the stress of transportation to a processing facility. “The animal just grazes and is relaxed, and is quickly killed and harvested without the stress of trailering and hauling into pens and cages,” Dr. King explains.

“Instead of herding, we train them to calls,” he continues. “We can make a buffalo do anything it wants to do. So we usually lead it in with a little bit of feed, and we’ve developed a call they will follow.”

Dr. King emphasizes that working with low-impact, holistic management methods is more effective than fighting the animal, and given its strength compared with cattle, a wiser choice. “Pound for pound, there’s nothing that compares to them,” Dr. King admits.

King III estimates approximately one-fourth of sales are direct to consumers through carolinabison.com. “One of my short-term goals is getting our retail side increased substantially,” King III resolves. “We can then do a little more direct education with retail customers on everything from cooking to the health benefits [of bison].”

The rest of the company’s production is sold through farmers’ markets, to walk-in customers, and wholesale to high-end restaurants, country clubs, and a local chain of 18 natural food stores called Earth Fare. “Earth Fare is opening many new locations nearing 30 within the next few years,” King III says.

The company is working on expanding its production. “We’re gathering larger tracts of land and preserving them in conservancy to maintain as agricultural farm land,” Dr. King points out. “That’s one way we’re bringing the bison back onto the land they once roamed. We look at bison as being one of the blessings of this country that we’ve sort of destroyed. Now we’re realizing its superior meat qualities, so it’s very important to bring bison back.”