Back to Profile Gallery > Casa Madero 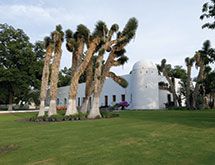 Located in Valle de Parras – a small but fertile region of the Sierra Madre Oriental Mountains – is the oldest winery of the Americas: Casa Madero. It is 416 years old with a rich history and a unique story. With 454 medals, this historical treasure also is the most-decorated winery in Mexico. Fifth-generation descendant Daniel Milmo is proud to be co-director and head of the commercial department for a business that is 100 percent family owned and 100 percent Mexican.

“Being the oldest winery in the Americas is a unique story that makes me feel very proud to lead its strategic direction,” Milmo states. “I do believe it has much potential. It has a history so rich and unique, but it has also been highly recognized, and the amount of awards we’ve received is something that also makes me proud. The culture of wine is just beginning here so I do believe we have many, many more years.”

One for the History Books
Originally called Hacienda San Lorenzo, the Casa Madero estate was founded by Spanish conquistadors in 1597 as a Jesuit mission with the purpose of planting vineyards for wine and brandy. Evaristo Madero purchased the vineyard in 1893, transferring the reins to a lineage that includes Mexican President Francisco I. Madero. During his time as property owner, the grandson of Evaristo was elected in 1911.

Flash forward to 1997, when Casa Madero celebrated its 400-year-anniversary by releasing its first harvest of Casa Grande Cabernet Sauvignon. Amazingly, the winery only started exporting wine in 1989. What happened between the 16th and the 20th century is an interesting story. Mexico’s wine started to become popular in the 1600s to the point of causing Spain’s exports to plummet. Charles II of Spain retaliated by prohibiting its colony from producing wine and spirits, except for church use. Once Mexico gained its independence, it was able to restart winemaking, but production was greatly hindered through the Mexican revolution and didn’t rise again until the 1980s.

Casa Madero’s first export was to Switzerland in 1989, which led to more possibilities outside of Mexico, and by 2000 the winery was exporting 95 percent of its production to 27 countries. “After that year, which was our peak for exportation, we started making an extra effort to sell our wines within Mexico because there existed a growing market, and it was an interesting opportunity,” Milmo says. “Today, we are intentionally giving priority to our national market. We sell 92 percent to Mexico, and we only export 8 percent.” According to Milmo, the United States is another intentional target. Little by little, export to the United States is growing, as well as to new international markets, which Casa Madero is gradually pursuing.

Medal Winner
In the Mexican market of white and red wines, Casa Madero leads the medal count. Its most awarded bottle is the Casa Madero Chardonnay, which has earned 77 awards. Last year, the winery won France’s most important competition in an upset Milmo compares to “Bottle Shock,” a movie in which a California wine defeated a French wine in a 1976 contest. Similarly, it was a great surprise for a Mexican wine to receive the highest marks and for Casa Madero Chenin Blanc 2012 to win best white wine at the Vinalies Internationales. “That is the most spectacular award the winery has received to date,” he says.

According to Milmo, the market in Mexico for wine is still very low, as the preferred drinks are beer and tequila. Currently, the nation’s consumer per capita of wine is between 500 and 600 milliliters per resident, compared to Spain or France, which are between 30 and 40 liters per capita. “This tells us that the culture in Mexico is still in the beginning stages,” he notes. “Despite this, we have hope because there is an interesting prospect for growth.” Channels, such as wholesale to hotels and restaurants – which represent 70 percent of Casa Madero’s sales – show that the wine category is growing between 8 and 12 percent annually. At that rate, it is believed the market will double in the next six or seven years.

Many factors go into making prize-winning wine. From planting the vineyard to manipulating the grape, every move is a step toward improving the quality of future production. The ISO 9001-2008 certification serves as proof for the customer, to give them a sense of security about the quality. “We have a commitment to finding the smallest of details that add up to the most quality points,” Milmo says. “Grain of sand by grain of sand, little by little, we believe very firmly in bettering the product as we continue.”

Casa Madero is divided into departments, with the main one being the vineyard. The philosophy there is that the vineyard is where the wine is truly created, and only with a quality grape. Approximately 170 people work in the vineyard under an agricultural leader who oversees a team of three engineers. One is in charge of new plants, another is in charge of irrigation and fertilization and the third controls weeds and pests. In the wine cellar area, there is a team of 17 people who take care of the grinding, fermentation and conservation of the wine. A separate department bottles the wine and takes it to the final stages through logistics. A small administrative group handles accounting, while a salesforce is spread throughout the country.

Community Service
When the Madero family took over the winery, Patriarch Evaristo Madero was significantly concerned about the state of his surrounding community. He created a home in 1912 for young women who came from broken homes or were without parents. This sanctuary still exists as a home where 40 girls live and a school from kindergarten through high school with 420 students. The tuition is practically free; students pay a small symbolic tuition to attend. Called Casa Hogar Quinta Manuelita, the facility is funded by the winery in partnership with a group of nuns who volunteer to educate the girls. “We make a difference for them, giving them an education and a place to stay for those who don’t have a home,” Milmo notes.