Back to Profile Gallery > C&E Farms 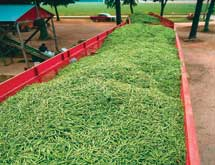 C&E Farms, a Cheriton, Va.- based firm that specializes in hydro-cooled green beans, has been on the leading edge of technology since it was founded by Phil Colson and Lester Erlemeier in 1986. “They pioneered a process of hydro-cooling green beans using cold water chilled to 40 degrees to get the field heat out and extend the shelf life,” says Bob Colson, Phil’s son and current president of the company.

“This allows the green beans to be shipped longer distances. This also helped reduce product shrinkage at the retail level.

“My dad, Phil Colson, took care of the field operations and sales, and my mom, Dot, ran the bean line in a small red barn,” Bob Colson adds. “This is how our brand became the ‘Red Barn’ label.”

Erlemeier supplied the equipment and C&E Farms grew from there. Phil and Dot have since retired, selling their share of the company to Bob and his brother Mark Colson.

Today, the firm still specializes exclusively in green beans under the Red Barn brand, using 200 tons of refrigeration for the hydro-cooling process, as well as automated and specialized equipment, to complete the process, Colson says. Erlemeier remains active in the company and is instrumental in the development of new processing equipment. The combination of a commitment to the most up-to-date technology available melds perfectly with homegrown expertise of a family with deep roots in agriculture.

The Colson family has been involved in farming for several generations. Mark returned in 1994 and Bob returned in 1996 to the family business as their father neared retirement.

The Colson family continues to have a strong presence at the firm, with Mark overseeing the planting and harvesting services; Justin, Bob’s son, handling operations and sales; and Sarah, Bob’s wife, serving as office manager.

The Erlemeier family also continues to have a presence in the business. Lester provides processing equipment and his son, Rob, assists the company with supplementing the C&E fresh market operation with green beans from the Erlemeier’s process company, D&E Farms. The company also takes excess green beans from the fresh market operation to the processor.

Growing by the Bushel

The company has expanded its facilities over the years, Colson adds. In 1997, C&E Farms opened a packing facility in Florida and is currently in the process of upgrading and doubling its size to 14,000 square feet, along with tripling the refrigerated space to 7,000 square feet. The project is expected to be completed this summer in time for the fall season, which begins Nov. 1. “We want to expand and modernize the Florida facility in order to comply with food safety requirements and increase production capacity,” he explains.

In 2003, C&E Farms started using  Tegra, a computerized system that can analyze green beans for color and quality. For example, all the beans are scanned, and if there is a blemish on a green bean, the Tegra sorts the good product from the bad product, Colson explains. It currently has two of these systems in its Cheriton facility. The Florida facility does not utilize the computerized equipment at this time, but the new facility is being designed to potentially incorporate this technology in the future.

“The benefit is that it is an additional tool to provide a better quality product for the consumer,” he says. “If we’re short on people, we can do more product through a color sorter. It doesn’t get tired like a human.”

Colson compares the company’s business to Midwest wheat harvesters. C&E works with farms along the East Coast – from North Carolina to Pennsylvania, as well as in Florida – and can haul produce from the field to the packing facility as far as 350 miles.

“We grow 5,500 acres of green beans, producing 800,000 to a million bushels per year and – as far as I know – we are the largest grower, packer and shipper of green beans in the country,” he says.

C&E Farms has an equal partnership with 45 growers who grow the crop, while C&E Farms handles the harvesting, packaging and sales, he adds. Most of its sales are in the Northeast corridor between Richmond, Va., and Boston, and its sales staff is located in the main office in Virginia. “We have direct sales to 22 different wholesalers and retailers, and we also use 18 brokers and six terminal market commission houses,” he explains, listing the Philadelphia Produce Market and the Huntspoint Market in New York City as two commission houses C&E uses. “That is the mix of our sales.”

The current economic conditions have impacted the sales of the company, Colson says, although that is more noticeably reflected in the last two weeks of every month. “People don’t seem to have as much money to spend on fresh produce then,” he says. “There seems to be a larger demand at the beginning of the month, and then the demand falls off.”

He doesn’t expect that trend to continue. “I feel that it’s going to improve this year,” he says.

Weather conditions are a bigger concern for the company, Colson says. “We try to have a consistent supply of green beans, but sometimes we have a hurricane or a drought, and that can have an impact on the crop,” he says. “It seems to have gotten worse [due to thunderstorms and heavy rains]. We’re in the El Nino situation, so it’s pretty wet and cool.”

For example, the company began planting on Feb. 6, which means the crop should be ready for harvest approximately April 1. “We are at least three weeks behind,” he says. “The cool weather has slowed the growth down.”

Seed selection is an ongoing process for C&E Farms. “There are a lot of varieties of green beans and we have a commitment to the selection of quality seed,” he says. “It can take upwards of three to five years to find a seed variety that can be developed for the market.”

The company works with several seed companies to test seed by starting with small plot trials, which are small plots where several varieties of seed are initially grown. The company then analyzes the different varieties, and the varieties that are successful will be planted in a larger trial consisting of several acres, and tested in different growing areas. “Some will do well in the heat, some in cool weather,” he notes. “Once we find [the right one], that variety will be added to our program.”

Food safety is a major concern in the industry, and C&E is doing its part to make sure it provides a quality product. However, it’s difficult for green beans to follow the same requirements as leafy green vegetables like lettuce, Colson notes. For example, auditors expect the company to cover green beans with a tarp while being transported. “They are concerned that the product could be contaminated while in transit on the highway,” Colson explains. However, “If we do that [tarp the beans], it will cause the beans to break down because of the heat.”

C&E Farms prides itself on its food safety practices, he says. The company is Good Agricultural Practices (GAP) certified, and is also a part of a GAP harmonization group sponsored by the United Fresh Produce Association. The group is taking the requirements of 40 different food safety audits and trying to develop one standard for the entire industry, he explains. That process started in October 2009, and is scheduled to be completed by October 2010. Colson says the company will be family-operated for the foreseeable future. “I feel the company will be in the Colson and Erlemeier families’ hands over generations,” he says. “Being family-owned, we are able to communicate well among ourselves.”