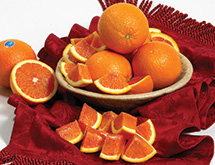 Some companies might balk at changes in food safety regulations, but Cecelia Packing Corp. is more than willing to meet the new standards. “[It’s] what we have to do,” President David Roth asserts. “Safety is No. 1.”

The company also has stayed ahead of the “varietals curve,” with products such as its Cara Cara pink navel oranges and Valencia oranges, Roth says. “We’re also getting quite big in the blood oranges,” he adds.

Taking Care
Cecelia Packing primarily serves retail and wholesale clients, but during the summer months, foodservice clients dominate with their need for the company’s Valencia oranges. Roth adds that the company’s reach extends beyond the West Coast to the Midwest and East Coast, as well as Mexico, Japan and Korea.

“We’re pretty much all over here and there,” Roth says, adding that 90 percent of its business is for repeat clients. “We have a good idea of what they’re going to want and we take care of them.”

Although Cecelia Packing is a medium-sized producer, “We’re able to take care of about 90 percent of a customer’s needs,” Roth says, noting that the variety of its fruit helps. “We’re kind of a one-stop shop.”

Doing the Best
Cecelia Packing has earned superior ratings for global food safety in the field. “You shoot for the best and hopefully you achieve the best,” Roth says. “We just do the best job possible [with] the criteria that’s been handed to us.”

Its safety efforts include a recall program in which the fruit in all of its shipments can be identified by code to the grower, acreage, date of packing and picking. Cecelia Packing also maintains a database of all pre- and post-harvest chemical applications at its ranches.

“We also have the water tested every year for food safety issues,” Roth says. “We can deliver what [clients] are looking for because we can control 90 percent of what we pack here.”

Experienced Staff
Cecelia Packing’s staff rarely experiences turnover, Roth says. “A lot of the people in the packaging house have been here 15 years or longer,” he says, adding that he himself has 26 years with the company.

“Cecelia is a good company to work for,” he says. “We try to treat the people as we would want to be treated, and I believe that philosophy has enhanced our ability to keep people. I probably replace only two people in any given year.”

That treatment includes offering insurance that is “better than Obamacare,” Roth asserts. “The industry has been doing it for 40 years, insuring everybody in the packaging house and in the field.”

The company’s senior management also maintains an open-door policy. “My door is always open for people to come in and complain if somebody feels like they’re getting slighted,” Roth says. “We will try our best to address those issues.”

Optimistic About Growth
Roth sees a strong future for Cecelia Packing. “We’re optimistic that the growth pattern we’ve had in place for the last 15 years will continue,” he says. “The oranges that we’re growing are good varieties.

“We’re well diversified on the citrus side so if one fails on us we’ll do fine,” Roth continues. “We’ve also been very fortunate to pick up properties with decent water, so hopefully, those assets can continue on.”