Back to Profile Gallery > Centerra Co-op

Centerra creates specialized solutions for each of its clients.

When Centerra Co-op serves its customers, it avoids cookie-cutter solutions to their problems, CEO Jean Bratton says. “The thing about our customers is they’re very diverse in what they do,” she states.

Some Centerra clients plant two acres of vegetables that they sell in local markets, and others have 1,000 acres of crops. “We also have had people come in that want to raise chickens for their family’s needs or they might come in with a pet with an easily upset stomach,” Bratton says.

This requires the company to take an individualized approach to each and every client. “We try to listen to what their unique problems are and help them solve [them] instead of pushing our solutions onto them,” she says. 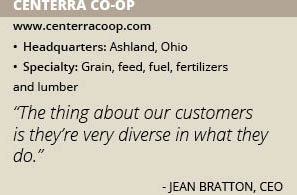 Based in Ashland, Ohio, the agricultural co-op sells crop inputs, feed, fuel, propane, specialty fertilizers and lumber, and buys back customers’ grain. Centerra’s roots in the cooperative system go back more than 80 years, but its current incarnation was formed in 2017 from the merger of Western Reserve Farm Cooperative and Town & Country Co-op.

“We doubled our size by merging together,” Bratton says, adding that Centerra provides service to clients as far away as western New York. “We try to maintain true to our roots and the individualized customer service that is a hallmark of what we do.”

Insightful Employees
Bratton took her role as CEO only recently, but joined Town & Country 15 years ago. After four years, “I looked around and thought, ‘If I ever want to become CEO in this man’s business, I need to get some grain experience,’” she recalls.

She left the co-op system for four years to work for grain and commodities companies before returning. When Town & Country merged with Western Reserve, the CEOs of both companies chose to retire. Bratton suggested herself as CEO, and was selected. Today, she says Centerra thrives by hiring “insightful” employees. This includes being approachable to its customers, she notes.

“That’s what we look for when hiring or deciding how suitable someone is for a position,” she says. “The other half of being insightful is being able to listen and apply hands-on knowledge to a particular situation our customers are challenged by.”

One example, she notes, is the lake effect caused by Lake Erie, which can delay planting for northern Ohio and Pennsylvania farmers. “We have to constantly come up with new ways of handling the geographical problems they have,” Bratton says.

Going Local
Centerra recently entered into two lease agreements for grain facilities in Pennsylvania. Western Reserve’s holdings gave the company a presence in that state, but “we did not have any grain facilities,” Bratton recalls.

Leasing allowed Centerra to avoid the time and costs of building new grain facilities, while getting closer to its clients and forming a better understanding of the local market. “Our customers have received those facilities very well,” she adds.

“They’re happy they can extend the type of business they’re doing with us,” Bratton continues, noting that she wants to continue with this method of expansion where Centerra buys and sells local products.

The company also has taken a more localized approach to its birdseed business. Today, “We sell birdseed made with local corn and other products in five different states wholesale,” Bratton says.

One Step Ahead
After the implementation of the Food Safety Modernization Act, Centerra’s clients have become more increasingly concerned about the safety of feed products. But the company was well prepared for this shift, Bratton says.

“We saw the Food Safety Modernization Act coming down the road, and we could have buried our head in the sand and said, ‘We’ll deal with that when it comes,’” she recalls. “Instead, we said, ‘This is a trend and this is what people want.’”

The company modernized its feed facilities and also started encouraging its customers to change agricultural practices to reduce the negative impact on the environment. This included working with farmers on precision fertilizer applications, so that the product is only put down where it is needed.

“Over 40 percent of our customers are doing that,” she says, noting that Centerra also encouraged customers to use a stabilizer with their fertilizer. This adheres the fertilizer “to the soil better when Mother Nature throws challenges at us.”

The Next Steps
Bratton sees a strong future for Centerra. “I’d like us to be known as the company that helps the customer take that next step, whether it is to venture into small livestock production or invest in the newest corn planter out there,” she says.

“We will be there helping them give the insight and confidence to say, ‘This is for me,’” Bratton says. “If I hear from customers that we did this consistently before I retire, that would be great.”

Centerra wants to expand its offerings, as it did recently with lumber. “We would like to continue this growth into additional products that have an agricultural nature to them,” Bratton says.