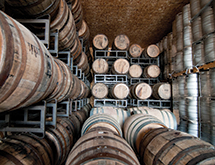 Becoming the biggest brewery in the Midwest is not the focus at Central Waters Brewing Co. Instead, the company works to create really good beer while incorporating sustainability practices that help shrink the amount of resources it uses daily.

Mike McElwain and Jerome Ebel bought an old brick building on Highway 10 in Junction City, Wis., in 1996 to build Central Waters. The facility was ready for its first beer production two years later.

After three years under the original ownership, brewer and co-owner Paul Graham purchased the equipment, building and recipes from McElwain and Ebel. Graham and Clint Schultz, another co-owner, then expanded on the original lineup by turning seasonal favorites Lac Du Bay India Pale Ale and Satin Solstice Imperial Stout into regular brews. On its five-year anniversary, Central Waters purchased a 15-barrel brewhouse and two 30-barrel fermenters to support larger batches.

In early 2006, Anello Mollica and Graham became co-owners after Schultz left the business. “Paul and I first met each other in college and at 18 we started home brewing,” Mollica says. “It’s true what they say; you have to be 21 to drink it and 18 to purchase the ingredients. By the end of college, we were throwing house parties and charging cup fees for our home brew on tap. This was in the late 1990s when home brewing wasn’t nearly as popular.”

Cornering the Market
Today, Central Waters boasts a portfolio of more than 20 different styles of craft beers. “There is something in our portfolio for every beer drinker,” Mollica notes. “We have everything from hoppy American style, India pale ales, honey blondes and easy-drinking Irish red ales.”

The brewery is unique in that customers tell the company that all of its beers are exceptionally good and the sales show it, Mollica says. “Most breweries have one beer, the one flagship beer that sells the most,” he adds. “We don’t have that. We have a few brands that are at the top, but all of our brands sell equally.”

Central Waters beer is available in Wisconsin, Illinois, Minnesota, Iowa, Philadelphia and New York. One of the biggest changes in the market over the past five years has been the ease of working with wholesalers. Some wholesalers are not as concerned about the taste of the product, and Mollica warns that could become the downfall of the industry. “We are going to see, hopefully, some market blowback in recognizing quality beer,” he explains. “We want to make sure they are only supporting quality beer.”

The oversaturated market also makes it harder for brewers to get their product on shelves and on taps in bars. In its market, Central Waters’ reputation precedes it in liquor and grocery stores, so it does not have trouble with shelf space. “There are so many styles out there, they want their customers to try everything,” Mollica explains. “From the sales end of things, we want to know what we can do to get back on tap sooner, such as producing products that might be on draft only.”

Sustainable Future
Incorporating sustainability practices into its business model is a major focus for Central Waters, which claims to be one of the greenest brewers in the nation. It was the first brewery to add two large sets of solar panels, one of them providing solar thermal heat to warm the brewery and provide hot water to the brew house.

Central Waters is the only brewery to be awarded by the Green Masters Program in Wisconsin. Central Waters reduced its power needs by 20 percent and reduced its water usage. “Shrinking our footprint is important because without water, energy, farmers and the ability to grow barley and hops, we don’t have a business,” Mollica says. “It’s our duty to try and shrink the amount of resources we use on a daily basis because, otherwise, we aren’t around.”