Back to Profile Gallery > Chef Shamy 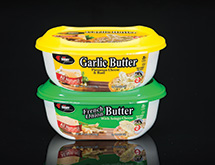 Cooking has been a hobby for Chef Shamy CEO David Shamy for more than four decades. In college, Shamy used his natural talent for cooking to impress his dates, which was when he created the company’s signature Parmesan Basil Garlic Butter. “It’s a recipe I developed in college to impress a girl,” he says. “I became a professional public speaker and that was my career for 35 years. I was speaking on investments and Chef Shamy was to be my wind down career. Trying to retire to a small business was like jumping out of the frying pan and into the fryer.”

It was not until eight years ago when Shamy’s youngest daughter’s high school drama club was hosting a fundraiser that he packaged his garlic butter to sell. “She didn’t want a typical theater fundraiser selling candy bars and popcorn. She asked if they could sell some stuff I made, including the garlic butter,” he remembers. “I packaged, created a label and sold it in the lobby. The next day I took the remaining butter down to a local boutique grocery store and it started to sell. I acquired a small commercial kitchen, brought my son-in-law on as a cook and my brother (a food broker) on to help sell it.”

“There is a real hunger for real butter and people love our products on they have tasted it,” he says.

Shamy creates all the gourmet butter flavors for Chef Shamy and his family participates in the initial taste testing. “I do the R&D and the sourcing, but I don’t rely only on my taste buds for final flavor approval,” he explains. “We make the butter in small batches, only making our butter 100 pounds at a time and every batch is taste-tested.”

Flavor Demands
Flavored butter is a new category in the U.S. market and although there is not a lot of competition, Shamy says there are imitators everywhere. “We came out with sauté butters and showed them in 2009 at the Fancy Food Show and two weeks later received a mail order for two of each flavor from a well known national brand,” Shamy remembers. “A short time later, they came out with cooking cubes that copied our flavored butters with a watered down, oil-based knock-off.”

The oil-based spreads do not taste as good as butter, Shamy says. “Consumers want quality and they want great taste,” he adds. “Chef Shamy Butters fills that need. Clues to [knowing if its an] oil-based margarine are the words ‘spread’ or ‘spreadable’ in the title. Real butter isn’t spreadable at refrigerated temperature.”

Chef Shamy’s honey butter sells at some stores next to products labeled “Cinnamon Spread.” The products are rarely sweetened with honey and are made cheaper and more profitable with oils in the ingredients. “Our products contain only real butter, no hydrogenated oils, no water, no fillers or chemical preservatives,” Shamy says. “Every ingredient we use is what you would use if you were making it in your kitchen at home. We use real chopped garlic, real cheese and no artificial flavorings.”

Because there is nothing like Chef Shamy’s butters on the market, Shamy says he gets requests for new flavors constantly. “Our current lineup of requests include chocolate butter, strawberry, pumpkin and truffle butter,” he says. “We would test a new butter as a seasonal or holiday item initially. It’s expensive – and risky – to come out with a new item and we are a small family business.”

Chef Shamy recently developed its Honey Butter Made with Real Passion Fruit and is also testing its new European-style whipped butter in grocery stores to see how well it performs. “The difference between American and European butter is that European butter is 82 percent butter fat and sometimes has a culture added,” Shamy explains. “It is usually sold unsalted. We have Americanized it just a little bit by adding a tiny bit of salt. European butter uses more milk to get higher in fat churned butter. It tastes smoother, creamier and richer.”

Expanding Distribution
Chef Shamy gourmet butters can be found in 600 Walmarts and is available in selected Sam’s Club locations at roadshows only. Chef Shamy’s tasty butters can be ordered online, but the push is on for full national distribution. “Our best seller is garlic butter with parmesan and basil,” Shamy says. “I was just answering an email from a woman who lives 30 miles from Tucson and we don’t have regular distribution in her area. She had bought 12 tubs of it at a roadshow and she had run out and had written to me in a panic to find more. Once people have tasted it or cooked with it, they can’t live without it.”

The Chef Shamy sales team has its butters being considered for distribution in more than a dozen national grocery chains, as well as in Korea, the Middle East and Mexico. It continues to work with Walmart , Sam’s Club and Costco to get its product in additional locations throughout the country. “Right now we want to expand our reach to more retailers,” Shamy says. “There are so many customers nationwide and some international customers who would like to get our butter. We want this to be in every grocery store so customers can find it as an option in the dairy or the deli of their local store.”

The most common question callers the Chef Shamy receptionist is, “why don’t you guys go on Shark Tank? Shamy’s answer, “we have been invited, maybe some day we will.”