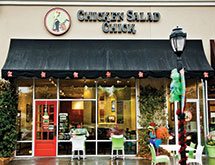 Does the “perfect” chicken salad recipe exist? Stacy Brown has tried to answer that question for most of her life.

In 2008, Brown took her personal quest to find the perfect chicken salad to her home kitchen in Auburn, Ala., where she had neighbors and friends taste her creation before reaching a consensus on a favorite recipe. Branding herself the “Chicken Salad Chick,” she then began selling this recipe around her neighborhood while formulating an idea for a future restaurant with her future husband, Kevin Brown.

The couple’s plans needed to be accelerated after Stacy received a call from the county health department, which put an end to her cooking and selling her chicken salad recipe out of her home. Drawing on Kevin’s business background and expertise as well as the help of friends, Stacy Brown opened a small carryout location.

The fast-casual dining concept offers 15 flavors of chicken salad including Stacy Brown’s signature recipe as well as specialty options such as barbecue and buffalo-flavored. Versions are also available with ingredients such as jalapenos, cheeses, fruits and nuts. “Chicken Salad Chick is a place [where] all chicken salad lovers can find something they enjoy,” the company says. The restaurant also offers gourmet soups, side salads and freshly baked desserts.

Chicken Salad Chick continues to grow. In 2010, the Browns formed Simply Southern Restaurant Group, a franchising entity that has already sold 85 franchises that are being developed in North and South Carolina, Alabama, Georgia, Florida and Tennessee. The company has a goal of expanding the brand nationally and reaching 100 franchise locations before 2018, it says.

The company’s newest location opened in August 2014 in Charlotte, N.C. The restaurant is owned by franchisee SingBev Hospitality LLC, which also operates restaurants in the South Carolina cities of Greenville, Lexington and Columbia.

Staying Involved
Stacy and Kevin Brown remain closely involved in the operation and expansion of the company. As Chicken Salad Chick’s founder and vice president of brand development, Stacy Brown is the face of the brand to franchise owners and customers.

Brown works with the company’s director of implementation to direct the decor and layout of all restaurant locations, as well as with its marketing director to develop new products, special promotions and marketing strategies. “Stacy takes a very hands-on approach and will work with the director of training to assist in and ensure all franchise owners, managers and staff members learn and understand the Chicken Salad Chick philosophies, policies and procedures,” the company says.

As the operations’s president and CEO, Kevin Brown is dedicated to always “providing leadership to position Chicken Salad Chick at the forefront of the industry,” the company explains.

“He is also responsible for developing and overseeing the strategic plan we’ve put in place to advance Chicken Salad Chick’s mission and objectives, while promoting revenue, profitability and growth as an organization,” Chicken Salad Chick adds. “He also oversees company operations to ensure production efficiency, quality, service and cost-effective management of resources companywide. Building and maintaining effective relationships while functioning as a business liaison between our franchise community and the corporate office is important to Kevin, as well as having some fun along the way.”