Back to Profile Gallery > City Tavern 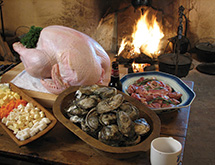 Chef Walter Staib is a third-generation restaurateur with more than four decades of culinary experience and a culinary historian with a focus on 18th-century cuisine. With a strong passion for all things 18th century, Staib couldn’t put the RFP written by the National Park Service down for Philadelphia’s City Tavern, which included historic information dating back to the 1770s.

“I got into the historic information and read about the parties that were held here and envisioned George Washington meeting John Adams here,” he says. “I had to do this: reopen the place and show Philadelphia what the 18th century was about.”

Staib completely restored City Tavern in 1994 to bring back its authenticity, which includes recreating menu items that were served in the 1700s. The restaurant’s most popular dishes are the turkey pot pie that was served to George Washington and a lobster pie, but Staib says they are all noteworthy. “Everything on the menu is, by definition, a signature item,” he adds. “The recipes are historically based and we make everything here. People’s palates are different now, so we get pretty close to the original recipes, but do cheat a little bit. We lowered the sugar in our desserts and include tomatoes, for example.”

To keep up with changing palates and dietary needs, Staib was lucky to come across a recipe Ben Franklin sent in 1770 to Philadelphia’s John Bartram that included instructions on how to make tofu. Staib created a fried tofu dish that includes spinach, seasonal vegetables, tomatoes and herbs with linguine. “That was the smartest thing I have ever done,” he adds. “It took care of the needs of vegetarians that before were hard to adhere to.”

The 18th-century authenticity even extends into the bar. City Tavern’s tap room offers ale brewed from recipes by George Washington, Thomas Jefferson and Alexander Hamilton. The restaurant does, however, include some modern amenities such as soft drinks, modern-day liquor and credit card machines.

Attracting a Crowd
City Tavern had a rough start when Staib opened in July 1994 because of a bad reputation it had developed previously from poor quality food.

“Philadelphia didn’t care about me and there was little interest,” Staib admits. “It was a rough beginning and people didn’t know what it was all about. Things didn’t start hopping until my first book came out in 1999.”

Since then, Staib has authored six cookbooks and became the host of “A Taste of History” on PBS, which received the 2012 James Beard Foundation nomination for Best TV Show on Location and was awarded six Emmy Awards. The show is a vehicle for Staib to share 18th-century cuisine with a growing audience and one of the reasons City Tavern has become a main attraction in Philadelphia. “We attract a lot of business people and tourists,” Staib says. “It’s a mixed group, but we don’t appeal to younger people and it’s not a place to meet someone – bring your own date.”

City Tavern always ranks among Trip Advisor’s top 10 of 4,000 restaurants in Philadelphia. In addition to Staib’s television show being a big draw for patrons, the restaurant holds its own by providing a good meal in a clean and friendly environment. The atmosphere in City Tavern is an 18th-century reproduction with Irish harp music playing, no televisions, low lighting and candles on all the tables. The restaurant offers 225 seats in 10 small dining rooms. “We are not a fly-by-night restaurant and people know what they can expect from us,” Staib notes. “We don’t foresee any changes.”

Faithful Recreation
Because City Tavern is an authentic recreation of the 1700s, Staib says its 80 to 100 employees receive historical training to be able to explain the rooms, highlights and the menu to guests. Every server has to pass a test before being allowed on the floor. “They are given a handout with an explanation of who we are, what we do and why,” Staib explains “We are part of the Department of Interior and the National Parks Service, so we work in tandem so everyone is aware of what’s happening at City Tavern.”

Although no changes can be made to City Tavern, Staib says he is fortunate to be accepted in the food scene all over the world so he can keep his finger on the pulse of the industry. As a consultant in China, the Caribbean and at Sandals Resorts, Staib is versed in most culinary cultures. “I see what’s happening out there and all the things we are doing are all the things people are talking about,” he explains. “We will stick to our guns and maintain good quality comfort food.”

Moving forward, Staib plans to keep his focus on City Tavern and his television show and to write another cookbook. “I’m not trying to have 1,500 restaurants anymore; one is fine,” he says. “I will concentrate more on the show. I have another book up my sleeve, and I will keep reinventing every day.”