Back to Profile Gallery > City Winery 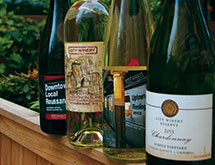 As a music venue owner, Dorf knew how to put on a good show, but it was his passion for wine that inspired him in 2008 to create City Winery – Manhattan’s first fully operational winery, restaurant and performance space. “I caught the bug for winemaking in 2004 and thought it would make a great theme for building a music venue in New York,” he says. “On some level, I like to say we are operating a fancy lemonade stand and figured out that the trick to bring people to the lemonade stand is putting on a good show.”

Apart from the New York, N.Y., location where it all began, City Winery can be found in Chicago, Napa and, most recently, Nashville. Each location is designed similarly – give or take a few thousand square feet – so no matter where patrons are in the facility they can see and feel, if not smell and taste, wine country. Part of the experience is seeing the steel fermenting tanks while eating or being surrounded by French oak barrels in the concert or private event spaces.

City Winery is at its core a winery and therefore prides itself on sourcing its grapes from some of the finest vineyards in the world. “We are proud to focus on terroir, the French expression of certain varietals growing better in specific climates and soils,” Dorf says. “Being a winery in the middle of the city allows us the luxury to seek the most expressive and world-class fruit for our customers.”

Wine on Tap
Wine accounts for 85 percent of City Winery’s total beverage sales and during one of its intimate concerts, selling 800 or even 900 glasses of wine from its collection of more than 400 SKUs is not out of the ordinary. Because of the high volume sold on any given night, City Winery implemented its tap wine program. “When we sell 800 to 900 glasses that is 150 bottles of wine and if we just made it, to put it in the bottle is a waste,” Dorf explains. “It’s a very efficient and environmentally sensitive way to deliver the wine to people.”

City Winery’s tap wine program transfers the wine from the barrel into argon gas-pressured stainless steel tanks where the wine is delivered via tap to patrons. “Tap wine is becoming more and more prevalent and we are in a great position for this because our wine doesn’t have to travel far, so there are no added preservatives,” Dorf says. “The barrels on tap have become front and center.”

More than 50 percent of City Winery’s wine sales are from tap wine, which means Dorf knows people are gravitating toward it. “The quality of the tap wine is remarkable and it looks great coming out of the barrel heads,” he adds.

Sensory Experience
City Winery targets patrons who have a passion for wine, music and great food. “It’s an older, sophisticated audience interested in exploring wine and culture,” Dorf explains. “It’s an audience that likes to sit and being seated works well with serving wine.”

World-renowned musicians such as Marc Cohn, Joan Osborne and Prince have all graced the stage in New York to put on intimate concerts for patrons. “We pride ourselves in putting on a high-level concert experience,” Dorf says. “To see these performers in an intimate space is very rare.”

But if the wine and performers are not enough to draw patrons in, its internationally inspired cuisine will definitely do the trick. City Winery chefs create seasonal menus that borrow from the Mediterranean where Italian, French, Spanish and Middle-Eastern cultures have paired simple and wholesome food with wine for centuries. The menu is not only wine-focused, but also wine-infused. “The culinary side of what we do is top-notch and highly rated,” Dorf attests.

Predominant trends in the food industry include patrons who value their experience and know where their food and beverages come from and City Winery delivers on both. “We educate people about winemaking and explain the simplicity and beauty of the craft,” Dorf says. “Our food is all locally sourced and our chefs work together when thinking about ingredients in a food program. We try and stay very much local because it’s better quality and people appreciate that.”

Moving forward, Dorf plans to open up to 20 City Wineries over the next decade in “cities that are culturally ripe for our high-end food, wine and music facility.”