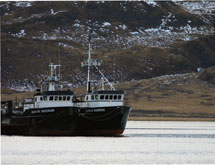 Clipper Seafoods Ltd. has plenty of competition for Alaska cod and other species of fish throughout the Bering Sea and the Gulf of Alaska. However, David Little’s company is one of the few harvesters utilizing baited hooks and longliners, a low-impact, environmentally sensitive fishing style that keeps species flourishing for the long term while ensuring the freshest fish possible for clients.

“We’re bringing fish on board one at a time as opposed to trawlers who bring hundreds at a time,” Little explains. “Since they are carefully handled individually, there is little or no bruising, so the flesh is very white. They are all flash frozen within a short period of time to guarantee absolute freshness of the highest quality of fish.”

Since 1987, Clipper Seafoods Ltd. has caught and sold high-quality, frozen-at-sea fish products from Alaska. The company operates seven freezer longliners – six of its own plus one it manages for a native corporation – in the Bering Sea and Gulf of Alaska, where it primarily fishes for Alaska cod. In fact, Clipper’s fleet will harvest around 29,000 metric tons of Alaska cod in 2012.

Clipper Seafoods sells its products all over the world, along with a limited distribution in the United States. Little says most of the company’s product is shipped to Europe, Japan or China, where cod is considered a delicacy.

Marketing to America
While the rest of the world enjoys Alaska cod on its own, Little says the high-quality cod Clipper Seafoods harvests and distributes has not caught on in the United States. He attributes this to cod being prepared for deep-fried dishes, which often use a lower grade of cod.

“Not many U.S. consumers appreciate the difference between a high quality of codfish and the breading and deep-fat fried,” Little says.

“When you put breading on it and fry it, you can’t tell the difference between our product or even what species it is because of the overpowering nature of breading and frying,” Little adds.

Instead of marketing its products to clients who use cod in this way, Clipper Seafoods sells its fish to consumers eating codfish at white tablecloth-type restaurants that serve the fish lightly salted or complemented with a light sauce. Little says this style of codfish is popular with the Japanese and the French, and these nations represent two of Clipper Seafoods’ largest distribution regions.

Best of the Rest
Clipper Seafoods is determining how it can create additional value from the species it harvests. In the case of its cod, Little says while half of the fish ends up at white tablecloth restaurants, the other half is low-value byproducts, including heads, collars, guts, backbones and livers.

“We’re working really hard to develop better products from that material so there is less waste,” Little says.

Future Considerations
Clipper Seafoods will continue to harvest its current target species while upgrading its fleet in the next five to 10 years. “There have been a lot of technological advancements in vessel design and machinery and efficiencies since we built anything, so that will be an exciting time,” Little says. “But that’s probably at least five years out.”