Back to Profile Gallery > Cluck-U Chicken 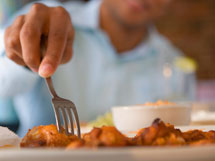 The National Chicken Council notes that college students are an important demographic in chicken wing consumption, and have been since the dish gained popularity throughout the United States in the early to mid-1990s. It was in 1985, however, that one pioneering student believed others would share his love of wings and launched Cluck-U Chicken in his college town.

The practice of cooking wings in peppery hot sauce began in the mid-1960s in Buffalo, N.Y., but that idea did not stay a secret for long and soon the practice traveled from that region. Rob Ilvento – a sophomore at Rutgers University – became a fan of the spicy treat, and thought it would be nice change from the standard pizza and burger places that populated the town of New Brunswick, N.J. His goal was to create “the best buffalo winger in the world” when he opened the first Cluck-U Chicken location.

Ilvento decided the key to his success would be to create unique recipes and sauces using “only the finest ingredients,” including fresh chicken – the Cluck-U tagline is “fresh food grilled or fried, U decide.” This plan worked well, because since the company’s inception, Cluck-U Chicken has sold more than a billion of its Buffalo Wingers, as well as hundreds of millions of chicken tenders – known at Cluck-U as “Breast Bits and Boneless Buffalo Wings” – sandwiches and sides. The company says its chicken “is an addiction” because it is made fresh with the operation’s secret recipes.

“Cluck-U prepares creative and tasty chicken recipes, producing a menu that is unique and diverse, with offerings to satisfy a wide range of tastes,” the company says. “For a healthy, delicious alternative to traditional fast food, patrons can choose from a variety of chicken sandwiches, wraps, salads, chicken pieces, Clucker-Spuds and Clucker-Bees.

“For something wild, different and delicious, Cluck-U offers their famous Wingers,” it adds. “Buffalo-style Chicken Wingers [are] available in a variety of hot sauces including Mild, Atomic, Nuclear, Thermo-Nuclear and 9-1-1, plus other specialty sauces such as Honey Hickory, Teriyaki, Mustard BBQ, Cajun, Cluckster’s Hot and Traditional.”

‘Perfect’ Flavor Profiles
The Cluck-U Chicken concept quickly became popular, and in 1990, JP Haddad – operator of the original New Brunswick location – took the concept to College Park, Md. He wanted to expand throughout the state, and in 2000, he created Cluck-U Corp. and bought the rights to franchise Cluck-U Chicken restaurants worldwide. There are now more than 20 units in Maryland, New Jersey and Penn¬sylvania; most of the locations are on or near college campuses. The franchise locations are called Cluck-U Chicken and the corporate-owned stores operate as Cluckster’s.

“This is a proven concept that offers great food, value and convenience to the consumer,” the company says.

The company notes everything on its menu is made to order from fresh ingredients. The Travel Channel ranked Cluck-U Chicken No. 9 on the Top 10 Places to Pig Out in the United States, and the company notes this is because its sauces are superior to others.

“Our flavor profiles are unique in the sense that we are wing connoisseurs, and in the beginning we didn’t stop reformulating the sauces until we had them perfect,” it says. “Every flavor was made for an individual demographic group. Other than the New Legal 911, all sauces are made from a recipe [we developed] at the beginning.