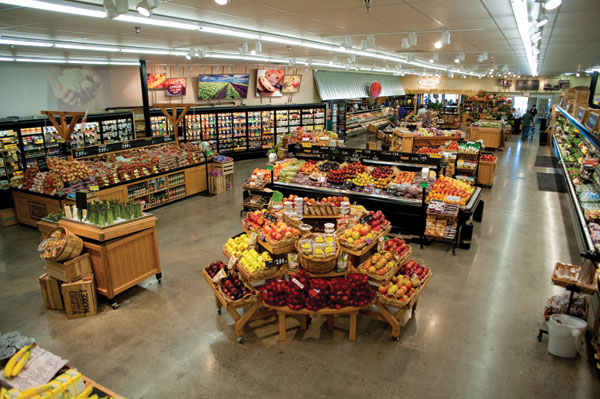 When a grocery store celebrates its 75th anniversary, it’s likely the business is seasoned, but no way is it stale. In this industry, a business must remain fresh to survive, and that is exactly what Cooke’s Food Store in Cleveland, Tenn., has done.

Cooke’s is a full-service, traditional store with all the departments one would find at a modern grocer: an extensive deli and butcher station, fresh produce, full-service pharmacy and drive-thru, a newly expanded section of frozen foods, an outdoor patio and a dining area with free wi-fi. The grocer also has a large section of natural, organic and gluten-free items, as well as a range of other goods and services. It’s more than just a wide variety of quality products and services that keep customers coming back, however, according to owner Dan Cooke.

“People don’t just shop to buy things anymore – they shop for entertainment,” Cooke says. “Con­sumers want to be entertained and engaged when they come to a store, and we are re­sponding to that. It shows in the way we display merchandise, how we light the store, the way we conduct sampling and in the new products we offer.”

Cooke’s customers also benefit from a high level of service. A butcher is on-duty full-time, for example, so “if you want custom-cut meat at 8:30 in the morning or 10 at night, someone is there to help you,” Cooke notes. Ad­ditionally, Cooke’s is not only engaging shoppers with money in their wallets, but the store also is attracting children with miniature versions of its shopping carts.

“We introduced the children’s buggies not long ago, and it’s been a big hit with kids and their mothers,” he says.

As a local operation, Cooke’s Food Store can respond to customers’ needs much faster than larger chains, he notes. “We are there with our customers, and we listen to them,” he says. “If they are looking for something new, we can respond almost immediately because our operation is flexible and we’re dedicated to service.”

A dedication to service has been passed through the generations of the Cooke family. Dan Cooke’s grandfather founded Cooke’s Food Store in 1936, and his father took over the business in 1958. Dan and his sister assumed management of the operation in 1995, and now the fourth generation is getting involved, as well. But it is not just the Cooke family that remains focused on serving customers – a service-minded culture permeates the operation.

“We have several long-term employees, and that is important for the service we provide,” Cooke says. “We try to do a good job of hiring and then training our people well when they are hired, but most importantly, we give them the ability to make decisions to take care of the customer the best way they can. We believe the customer is No. 1, and that is something that we instill in all of our employees.”

Additionally, Cooke’s takes pride in recognizing employees for the quality work they do. The company’s Facebook page is full of images of its team members who have excelled in their jobs, such as Pharmacist Gina Moser, Steve Davis, who was a contestant in the Tennessee Best Bagger competition, and Matthew McTaggert, who received the Tennessee Grocers Education Foundation Scholarship, as well as all of the recent Employees of the Month.

Cooke’s takes pride in its local community by supporting a number of events and organizations. Last year, for example, Dan and his wife, Janey Cooke, participated in a campaign that raised more than $2.2 million for United Way of Bradley County, Tenn. In Au­gust 2010, the Cooke’s Food Store Back to School Tailgate event raised more than $3,000 for the local Boys and Girls Club.

“We participate in several events throughout the year, particularly with the Boys and Girls Club and United Way,” he says. “Every year, we host a charity golf tournament to raise money for breast cancer research, but that is in addition to numerous other events.”

Cooke’s Food Store has been at its Keith Street location in Cleveland since 1976, but the company also has seven Super­saver Cost Plus Foods locations in Tennessee, Georgia and North Caro­lina. These stores have smaller footprints than the 35,000-square-foot Cooke’s Food Store, with an average of 15,000 square feet of space and 8,000 SKUs, Cooke says.

“Supersaver Cost Plus is more of a limited concept with a mix of private-label and national brands,” he explains. “It is very value-oriented.”

Cooke’s relies on its suppliers and warehousing partners to develop its private-label products, but quality and value remain the focus. The slow economy, Cooke says, has fueled the sales of the company’s private-label brands, so it continues to develop more goods under its own name.

“The key is having quality products and then finding the right size and best value, then educating the customers about those products,” he says. “We have a broad range of private-label goods and we are expanding in that area. We started with canned vegetables a few years ago and our private-label brand grew from there. People will try one, and if they are satisfied, they will try more. Right now, people keep coming back.”

The key is having quality products and then finding the right size and best value, then educating the customers about those products.

Cooke believes the Supersaver concept will be the company’s primary growth vehicle in the next few years, but Cooke’s Food Store also has some plans to remodel. Upgrades to that location, Cooke says, will make the shopping experience easier with new POS systems. The company’s goal is to make the shopping experience “easy and enjoyable,” he says, and to eliminate hassles.

“I’m proud that we are able to grow and prosper, and that we continue to have a bright future after 75 years,” he stresses. “After all this time, we’re still there for the customer – ready to serve them and do what they need. The fourth generation is now entering the business, so there is no end in sight for us.”