Back to Profile Gallery > CraftWorks Restaurants and Breweries Inc. 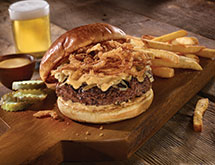 The revolution in craft brewing of beer began in the 1970s, but at that time, finding the products of a few small regional or national breweries at restaurants and even liquor stores was still difficult. But not at Old Chicago Pizza and Taproom. Founded in America’s Great Bicentennial Year of 1976 in Boulder, Colo., by Frank Day, Old Chicago established one of the first loyalty programs in the bar business – the World Beer Tour.

By the 1980s, the number of craft breweries had increased. At Old Chicago, hundreds of beers from around the world – new craft breweries in the United States that now are some of the most established national brands – and breweries in Germany, England and Belgium that were hundreds of years old had their bottles nestled next to each other in copious coolers behind the bar.

Each location has approximately 100 beers in total. “Our franchise locations have 30 taps, and going forward, all our new restaurants will have 36 taps, with the rest in bottles and cans, predominantly bottles,” promises Mike Mrlik, president of the Old Chicago brand.

Approachable Food
CraftWorks’ Old Chicago brand specializes in popular and innovative food without stretching the culinary tastes of its patrons to pork bellies and ostrich meat. “In terms of influence, we talked about our food being approachable, but what is approachable is getting stretched by the millennials, food networks and gastro pubs,” Shannon says. “Ten years ago, we wouldn’t have considered a bison burger on the menu. Today, that is almost mainstream. So it is kind of open, but we don’t pretend to be on that cutting edge of food.”

But Old Chicago stays on the cutting edge of beer, serving exclusive beers from breweries. “We had a collaboration with Left Hand Brewery to develop a unique beer just for Old Chicago that was a collaboration with Allegra Coffee, Left Hand and ourselves,” Shannon says. “The beer was coffee-based but not a heavy stout – which is what you usually see. It was a light ale that was for coffee lovers who also like beer. That’s the sort of thing that we try in our collaborations with local and regional brewers. This is something that is unique to Old Chicago. It’s in for two weeks and then gone forever.”

The World Beer Tour was established to encourage variety in customers’ beer choices. When each of 110 beers on the tour are ordered and tasted, the customer receives incentives such as points and t-shirts. Old Chicago also offers mini-tours on specific themes, such as baseball, St. Patrick’s Day, football, Halloween, Cinco de Mayo and others.

The corporate staff includes a full-time certified cicerone, which is to beer as a sommelier is to wine. “What he does all day is figure out these unique thematic beers, which are part of mini-tours,” Shannon says. “What is different about Old Chicago is we will often bring in unique specialty beers that link to the theme just for that three- to four-week period that they’re available.

“We are trying to strengthen and become even more localized and regionalized on our craft beer selection,” Shannon continues. “It used to be 10 years ago it was really just hotbeds of craft beer like Colorado where you could get really unique, good, local beers. Nowadays, every town we’re in has a great local brewery. So we’re moving more and more to [support] that local craft beer industry in all of our locations. That’s a big change we’re making.”

Tasting is Key
Old Chicago Pizza and Taproom supports adventure in its customers’ beer selections by encouraging tasting. “A taster is an ounce or two of a beer, and at this point, about one-third of our guests try one,” Shannon says. “We are trying to make that number higher. So if you order an IPA, the barkeep is supposed to offer you on the refill a sample of a different IPA to help you explore. It’s about that sharing the discovery experience.”

Servers and bartenders are being trained in the different beer styles. “A year ago, we really put a plan together to become the craft beer authority and created our own internal test for them to become beer explorers, so their knowledge would pick up and create that excitement in our bars and taverns and dining rooms, so people could see we are the craft beer authority,” Mrlik says.

More Than Just Pizza
Although the name “Old Chicago” might suggest deep dish pizza, the menu offers thick or thin crust from $8 to $20 along with small “tavern bites” ranging in price from $3 to $10. On the Pick Three menu, three tavern bites can be chosen for $9.

Ingredients and recipes for the food are chosen carefully. “The food is not something you can buy off-the-shelf somewhere else,” Shannon emphasizes. “For example, one of our best hamburgers on the new menu is the craft beer burger, with grilled onions soaked in a dark beer to impart that flavor. It goes well with a nice stout. Our food is nothing too pretentious. Everything is approachable. You don’t look at it and say, ‘What is this?’ But it has a little twist to make it interesting and different.”

Refreshed Interiors
The Old Chicago format is being revised. “We‘re changing some of the look and feel of the interior and going to a more bar-centric feel with a visible keg room that defines that we are the craft beer authority,” Mrlik says. “We continue to improve the quality, ambiance and the interior to have the consumer dictate what he or she wants to feel with the bar-centric atmosphere.”

The company’s most recent prototype features some dark woods and bricks. “The restaurants tend to be open – more like a Chicago loft look – and not overly neon,” Mrlik says.

Old Chicago Pizza and Taproom plans to continue its expansion. “We have a three-year plan that says we need to increase by 45-plus restaurants,” Mrlik says. “We do well in suburbs and small towns. We’ll look at North and South Carolina and Texas as growth vehicles, and then infill markets in Colorado, Nebraska, Kansas and Minnesota.”

Mrlik anticipates from eight to 12 of those 45 new locations could be franchised. “We prefer multi-unit restaurant operators who need an additional brand to fill out their portfolios,” he says.

Shannon sums up the Old Chicago Pizza and Taproom brand. “Our basic brand promise we make to our guests is pretty compelling,” he says. “We offer the best in regional, local craft beers. We serve it with handcrafted pizzas and distinctive taproom fare that’s familiar but with a twist – something that is made with or goes with craft beer.

“It’s beer-friendly food, and it’s served in an environment that is like a ‘Cheers’ bar you saw on TV 20 years ago,” he continues. “We have a real sense of community, a sense of come-as-you-are, a sense of discovery, of something new, all at a great value. We’re very conscious of being a blue-collar, middle-of-the-road brand. There’s a place for this brand – a place for that experience – and that’s why it continues to grow.”