Back to Profile Gallery > Crider Foods 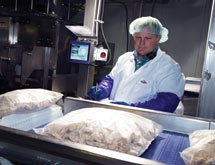 As consumers become more time-pressed, they seek out food products that can provide them with speedy solutions to food preparation. An aid to time-pressed and health-conscious consumers are the canned and fully cooked meat products Crider Foods processes and distributes for private labeling and co-packers worldwide.

Evidence of the company’s fresh approach to its marketplace is the new logo it has developed. “Our old logo had a chicken incorporated into it,” recalls Mark Howell, executive vice president of sales and marketing. “Our roots started in the poultry industry, but we have migrated into more of a food company. We manufacture beef, pork, turkey and other proteins. We decided that we had outgrown the chicken logo, so we went to a new design.”

Crider’s commitment to quality and safety in its food production is proven by the $45 million it has spent this year to upgrade its 400,000-square-foot manufacturing plant at its headquarters in Stillmore, Ga. In 2000, a new canning plant was built to replace the previous one in Lincolnton, Ga., that was destroyed by fire in 1999. In 2003, Crider Foods built a new manufacturing plant capable of producing a wide variety of fully cooked products.

In 2005, Crider Foods purchased Claxton Cold Storage to warehouse its fully cooked products and occasionally some raw materials in a frozen state. The cold storage warehouse measures approximately 100,000 square feet. A new, 110,000-square-foot dry goods warehouse was added to the manufacturing plant this year, along with automated packaging lines and a retort system.

Two Plants in One
The two sides of Crider Foods’ business – canned and fully cooked meats – are completely separated in the manufacturing facility. “The two separate operations in the same complex are treated totally differently,” Howell emphasizes. “They have separate employee entrances and different access points on the fully cooked side of the business. For ready-to-cook products, employee management is very important.”

This separation is necessary to control the sanitary conditions under which the fully cooked products are produced. “Food safety is the paramount thing we focus on,” Howell stresses. “We’ve done everything we can to take advantage of the latest technology to make sure we have a very clean, safe environment when we’re making our products.”

Among the food safety measures in the plant are antimicrobial flooring to discourage bacterial growth, a specialized air handling system to add a layer of sanitation control and separate reverse flow drainage to eliminate cross-contamination if drains back up. Crider Foods has received the safe quality food (SQF) certification for both of these plants.

The company has a gold certificate of recognition from Silliker, the international network of accredited food testing and consulting laboratories. “We do environmental testing in the facility on a daily basis,” Howell maintains. The plant also is certified by the U.S. Department of Agriculture and the Food and Drug Administration.

The Crider Foods plant is certified by the European Union. Approximately 80 to 90 percent of Crider’s products are sold in the United States, but the rest is distributed to Canada, Mexico, the Caribbean, Central America, Australia and Asian countries, such as Japan and TaiwanCrider Foods discontinued its chicken slaughtering operation approximately two years ago and converted the space for canning. Now raw meats received at the Crider plant are purchased from other processors. Then the meat is marinated, steam cooked, diced and canned.

Cans are sent through a retort process that heats them up to 240 F or above to destroy any bacteria and make them shelf-stable. Then the cans are labeled and packaged.

Private Label
Howell estimates that 95 percent of Crider Food’s production is private labeled or co-packed for food manufacturers, warehouse clubs or retail chains. Some of Crider’s products are added as an ingredient to other food, such as its diced chicken being added to chicken salad.

The company also sells its products under the brand names Harvest Creek, Comfort Creek and Crider Foods, but that business is being de-emphasized so the company does not compete against its own customers. “We are really a customer-oriented, marketing-driven company with a strong emphasis on food quality and food safety,” Howell emphasizes.