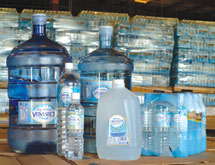 For nearly 10 years, Pepsi sold Cristalia Premium Water throughout Puerto Rico, improving upon its production and quality control. Then, in 1998, the local Pepsi Puerto Rico bottler was sold to the larger Pepsi Americas bottling corporation. At the time, Pepsi was preparing to introduce its own bottled water brand, Aquafina, to the market, so it made the strategic decision to sell off the Cristalia division.

That same year, David Virginia, who was CFO of Pepsi at the time, resigned from his position at the beverage giant and gathered a group of investors to acquire Cristalia Premium Water from Pepsi Americas. “I knew there was a lot of untapped potential in the water business – pardon the pun,” Virginia says. When he purchased the company, its annual revenues were approximately $4 million. A little more than a decade later, sales have more than quintupled to $22 million. “We are now the market leader and outsell Coke and Pepsi’s waters in this market, Dasani and Aquafina,” he states.

Cristalia Premium Water utilizes the most advanced technology and purification process to ensure quality. The company sources its water from its own deepwater wells on a large plot of land in Barrio Cotto Laurel, Puerto Rico. Owning and protecting the land ensures its recharge zone is kept free of agricultural contamination or manmade pollutants. The water is chlorinated at the well source and pumped through Cristalia’s own pipeline system to its 20,000-square-foot production facility in Ponce. A similar process is duplicated in the new 160,000-square-foot facility in Carolina, Puerto Rico.

At Cristalia’s soon-to-be-certified ISO 9001 bottling plant, the water is passed through a multimedia filtering system, followed by a coconut carbon filtering system and then a special system of five- and 10-micron filters to remove any odors or bad tastes from the water. Next, it moves on through a commercial grade water softening system to eliminate any calcium or magnesium that may be present in the water. It then goes through an ultraviolet light system to kill any bacteria suspended in the water.

The water goes through another 10-micron filter and then passed into a high-capacity, 120 gallon-per-minute reverse osmosis system to filter the water down to a molecular level. Lastly, Cristalia injects ozone into the water to eliminate any last traces of bacteria. Ozone breaks into pure oxygen to super-oxygenate the water for an even cleaner, crisper taste. Its processes and products are rigorously tested, have obtained the top quality certifications in the industry and undergo continuous quality improvement measures, Vir­ginia says.

To ensure efficiency and maintain quality control, Cristalia manufactures its own half-liter, one-gallon and five-gallon water bottles and plans to go into other areas of self-manufacturing with regard to packaging. “We’ve been able to utilize our labor content very well with high-automation equipment,” Virginia says. “We are similar to the U.S. bottler in that respect, but what differentiates us from the U.S. bottlers is that we have a very strong home, office and retail delivery business.”

Cristalia delivers to every chain store on the island. In June, the company signed on as the primary distributor of imported Spanish mineral water, Mondariz. It also offers private-label services to local hotel brands. “Hotels like to have their own brand of water,” Virginia notes. “Puerto Rico, being blessed with many sunny beaches, gets a lot of tourist traffic.”

New product developments are certain to accelerate Cristalia’s growth. The company recently ventured into the realm of vitamin sports water, launching Cristalia HydroEdge in January. Virginia says “it’s taken a while” for retailers to grant shelf space to new beverages, “but we’re starting to see it gain distribution.” Its new product – which is available in lemon-lime, orange, grape and fruit punch flavors – has been “very well received” and now has its own spokesperson, local volleyball star Picky Soto.

The company also plans to introduce alkaline-based waters and broaden its distribution channel to include other foods and beverages. Ultimately, Cristalia wants to expand its international reach by infiltrating other Caribbean markets and developing a presence in the United States.

“The quality of our product helps a lot,” Marketing Director Gelitza Cruz explains. “When you are confident in your products, the company almost runs itself.”