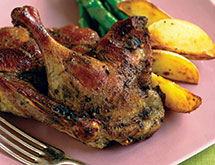 As the second-largest duck processor in the United States, Culver Duck Farms oversees 100 contract growers, 10 breeder farms and processes 25,000 ducks per day. “We try to be the best at what we do,” COO Tim Rouch says. “We don’t try to be the least expensive, but strive to produce the best product. We generally have higher prices than our competitors but we also offer higher quality.”

Pedigreed Pekin Duck
The first Pekin Duck arrived in New York in 1857 from China; only six ducks survived the voyage. Through his own study of the Pekin breed, Culver was the first to use “straight genetics,” increasing the number of good breeding ducks. His research lead to the pedigreed Pekin duck, bred for better disease resistance, early maturity, feed conversion, weight and meat. Culver Duck Farms continues to devote a lot of time at its “home farm” to continue the research and development of breeding lean ducks. Culver Duck Farms prides itself on raising all-natural ducks and only the leanest ducks are selected for their breeding program.

The company’s target customers are Asian grocery store and restaurant owners. Asians, among many others, consider duck to be a healthy choice rich in Omega-3. “We specialize in the Asian market because our lean duck is what is most appealing to them,” Rouch explains.

Culver Duck Farms is located in the heart of Amish country, producing more than six million ducks annually and employs about 250 people. The company hires people who are able to withstand the challenges that are present with processing poultry. If employees are willing to stick with it, they can find that Culver Duck Farms is a satisfying place to work, Rouch says.

Increasing Efficiency
“The duck industry is still very much a hands-on process compared to the chicken industry in terms of the latest technology,” Rouch says. “It is an industry of very few companies – there are only six in the United States.”

Culver Duck Farms automated parts of its evisceration and packing lines over the past several years. As production increases, the company is continually focused on improving efficiency. One of the ways Culver Duck Farms has upgraded its facility is by building an anaerobic digester, which is used to turn waste by-products into energy for the community. Duck offal, cooking waste, and silage are used to produce methane that fuel three generators. Culver Duck Farms is one of only a few select groups of agricultural operations nationwide that are using this type of technology.

The company is also building a new anaerobic covered lagoon system to treat its wastewater to reduce the smell for its neighbors. “We want to keep our neighbors happy, so we are building a new lagoon,” Rouch notes. “It wasn’t required by the state and we are in compliance, but we want to be a better neighbor.”