Back to Profile Gallery > Daniele Inc. 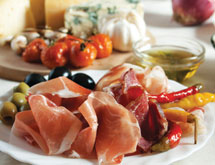 Not many companies can boast of the sort of winding path Daniele Inc. has carved en route to its current incarnation. Start¬ing with a family that escaped a communist regime in Eastern Europe and eventually launched a dry-curing factory in its adopted home to produce the charcuterie of its homeland, Daniele Inc. has survived through the hard work and creativity of three generations of the Dukcevich family, and now operates out of three facilities in Rhode Island.

“Deep in the unspoiled forests of New England, the Dukcevich family is hand-making some of the finest charcuterie in the world,” the company explains. “More than three decades ago, the family brought their delicious salami to America.”

A Family Affair
In 1945, Stefano and Carolina Duk¬ce¬vich immigrated to Italy after communist Yugoslavia took over Croatia at the conclusion of World War II. They eventually launched a dry-curing plant in Trieste, one of the first of its kind in the northeastern Italian region.

The combination of Carolina’s work ethic and Stefano’s creative endeavors helped the business grow through the 1940s and ’50s, according to Daniele. Eventually, Stefano purchased a truck for deliveries and Carolina hired help to make her sausages, and shortly thereafter, the couple moved into a larger factory.

Soon, “Stefano and Carolina had built one of the most successful food businesses in the region, adding products such as cooked hams and prosciutto,” according to the company.

The couple’s youngest son, Vlado, brought Daniele to the United States in 1977 when he moved his family to Pascoag, R.I., to open an Italian specialty meats business. Today, Daniele is in its third generation of Dukcevich family ownership, with Davide and Stefano Dukcevich at the helm. The duo built the company’s third facility in Rhode Island, and the state-of-the-art plant continues to produce gourmet Italian products using traditional dry-curing techniques, the company says.

Variety of Options
Daniele produces the Del Duca brand of products, which includes prosciutto. The company says each prosciutto is prepared in the United States using traditional European dry-curing techniques.

“After applying sea salt, our Del Duca prosciuttos are aged for a minimum of nine months,” Daniele says. “Our experts inspect each Del Duca prosciutto individually to determine when they have reach¬ed perfection. The process is lengthy but it ensures that every slice has a consistently sweet – never salty – flavor.”

Made from premium pork, dry sausage is one of Daniele’s more popular items. Its sopressata line of products contains no fillers or additives, and is coarsely ground, flavored with natural spices and hung to dry.

“Our sopressata is a treat to be shared with [our customers’] family and friends,” the company says.

For its salami, Daniele adheres to an Italian tradition that calls for dry curing for up to 120 days. The company also says it never uses inexpensive additives or fillers in its salami, including non-fat dried milk or corn syrup. “This traditional method ensures a mouth-water experience in every bite,” Daniele says.

The company says it produces its capocollo from the solid muscle be¬tween a pig’s head and shoulder, which gives this delicacy its name in Italian – “capo” means “head” and “collo” means shoulder. Capocollo is cured with the appropriate amount of seasoning and hung to age for up to four months.

“Available in hot and sweet, our capocollo is lean and finely marbled,” the company says. “[It is] a true staple in any antipasto or Italian sandwich.”

Daniele touts its pancetta for use in Italian sauces or salads. This product also is dry-cured in a traditional manner, as well as seasoned with wine and peppercorns for an authentic taste.

The company says it uses the same mortadella recipe developed more than 500 years ago by the monks of Bologna and Modena. Daniele says it bakes its mortadella for 24 hours at low heat to enhance the product’s taste and aroma.

The company’s chorizo honors traditional preparation by using white wine and imported Spanish paprika to season the coarsely ground pork. “Enjoy it with tapas or add some to [a] next meal for instant flavor,” the company adds.