Back to Profile Gallery > Darrenkamp’s 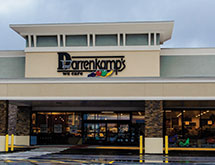 The trend of customers using full-service grocery stores almost as restaurants is sweeping the nation and the world, but at Darrenkamp’s, it is aided by the grocery chain’s unique food offerings. These include more than 60 varieties of flavored sausage made in-house, red beet eggs, whoopee pies, and all the fresh produce and natural foods the Amish of Lancaster County – where three of the chain’s four stores are located – have to offer.

“We have a lot of different deli salads you wouldn’t see many places, such as Amish potato and macaroni salads, and our own ham and cheese spread,” points out Ryan Darrenkamp, manager of the Newberry Commons store in Etters, Pa. “We’re pretty proud of all those things. We have 20 items we make fresh in the store every day. After our deli, our meat department would be what we’re most known for. Larry Darrenkamp is the meat manager, and he is really hands-on with that. He helped create a lot of the flavors.” Among them are turkey, apple, horseradish, cheddar, sweet potato, onion, crab, blueberry and a tavern sausage that has beer in it.

Popular Cafes
Each store has a Jane’s Café, which is named after Ryan’s grandmother, whose husband, Jerry, and his uncle, Dick, founded the company. The cafes at three of the stores have seating except for the Etters store, which opened in May.

“Jane’s Café is a great place to meet up with friends for a meal or a quick snack,” Ryan Darrenkamp says. “They do great lunch business. We have regulars that come in every day. The place is packed. We do a hot bar and a salad bar, a grill for made-to-order burgers and sandwiches, and we do our own fried chicken, strombolis and pot pies. We make our own pizzas to take home and bake, or for serving out of our own pizza ovens. The cafes attract quite a lunch crowd.”

At dinnertime, customers tend to purchase the café food to-go for cooking or consumption at home. Each store also has its own from-scratch bakery. “We use my grandmother’s recipe for sand tarts,” Darrenkamp says. “They melt in your mouth and are available now for the holidays.

Darrenkamp’s also is adopting the trend toward more organic produce. “Our new Etters store has an entire aisle of just organic items and another entire island of gluten-free products,” Darrenkamp notes. “We’ve dedicated a couple different coolers to a local dairy we partner with to provide organic milk in glass jars. It’s very popular. There’s also a lot of organic produce in our produce department.”

Renovated Store
The Newberry Commons store in Etters was previously a grocery store that had been vacant for approximately three years. Extensive remodeling gave the store a brand new look inside and the entire plaza a new façade.

“We had to pretty much gut it,” he continues. “We had to redo the whole floor, repaint the ceiling, redo all the lights and replace most of the cases. There were very few things we could salvage. We replaced 80 percent of the shelving and rebuilt some coolers. We had to put in a whole new refrigeration system. The new décor is colorful and clean, making for a pleasant shopping experience.”

Darrenkamp’s had purchased used coolers and equipment from a store being closed by its former wholesaler, AWI, around the time it agreed to move into the Etters location. The coolers were refurbished with new energy-efficient LED lighting, and a new energy management system was installed in the store, along with brighter and more energy-efficient T8 fluorescent lamps.

The company took advantage of this opportunity to totally reset and redesign the store, and it emphasized organic products to compete with a nearby Walmart. “We also struggle with getting people back here who had already changed shopping habits when the previous store was shut down for all that time,” Darrenkamp says.

Darrenkamp’s is having gasoline pumps built in the parking lot of its Elizabethtown store to offer greater local convenience for its customers. The company is known for its commitment to the communities in which it does business. It donates slightly bruised produce that it does not want to display in the stores to local food banks, along with food that is due to expire. It also helps with events for local scout troops and churches.

“We’re always willing to help, and we have a lot of our loyal customers in the Lancaster area because of that,” Darrenkamp emphasizes. “We’re always out in the community doing things.”

That may be due to the company’s family business culture. “It’s kind of nice not having to worry about the niceties of business culture,” Darrenkamp remarks. “You can just tell your family how it is. We all get along well and have a lot of fun. That’s the reason a lot of my generation who moved away or tried different professions and towns have wanted to come back and work with the family.”