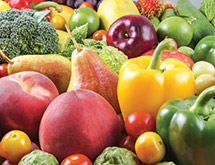 The wholesale distribution of fresh produce hasn’t changed very much since the early days of D’Arrigo Bros. Co. of New York Inc., and that suits the company just fine. Vice President Matthew D’Arrigo says the multigenerational family owned and operated business has benefited from concentrating on the same areas of excellence that made it an industry leader in the mid-1920s. Namely, the company continues to focus on providing its customers with the highest-quality fruits and vegetables in the timeliest fashion. Although the technology may have changed somewhat, the keys to success for D’Arrigo Bros. Co. of New York have remained constant through four generations.

The story of D’Arrigo Bros. Co. of New York begins with the story of brothers Andrea and Stefano D’Arrigo, who emigrated from Sicily to the United States in 1904 and 1911, respectively. The two brothers obtained engineering degrees and served during World War I before settling into the produce business. It was in 1923 that the brothers established their first business in Boston, bringing fresh produce from around the country to the Boston market. While on a trip to buy wine grapes in California in 1925, Stefano D’Arrigo noted the abundance of land perfect for growing produce near what is now San Jose, Calif. With a packet of broccoli seeds from Sicily, the brothers established a growing operation on the West Coast.

Utilizing the railroad and developing a refrigeration system to keep produce fresh during the cross-country trip, the D’Arrigo brothers started shipping fresh fruits and vegetables from California to Boston year-round. This was unprecedented at the time, and formed the basis for the fresh produce industry as it is known today. The company trademarked Andy Boy as the first-ever brand of fresh vegetables in the United States, and the brand continues to this day. After many years of success in Boston, the D’Arrigo brothers opened their New York operation in 1948 with Andrea’s oldest son, Stephen, in charge.

The company says that under the leadership of the younger Stephen D’Arrigo, the company grew into a full-line supplier of fruits and vegetables, which was unusual at the time when many distributors specialized in just a few items. Adding a fuller selection of produce made D’Arrigo Bros. Co. of New York a one-stop shop for many of its customers and helped the company set itself apart in the crowded and highly competitive New York market. Today, D’Arrigo Bros. Co. of New York serves the New York market with a wide variety of fresh produce.

Dedicated to Quality
Today, the fourth generation of the D’Arrigo family is involved in the company, which continues to distribute the Andy Boy brand along with produce from other established and recognizable brands including Driscolls, Green Giant, Sunkist and Del Monte. D’Arrigo Bros. Co. of New York offers more than 1,000 types of fruits and vegetables on a year-round basis through its fleet of delivery trucks and a highly qualified staff of dispatchers dedicated to finding the most efficient routes to customers’ stores. The combination of high-quality produce and highly qualified people means customers have the highest expectations for D’Arrigo Bros. Co. of New York, and the company meets those expectations consistently.

“Our people and our suppliers are what distinguish us,” Matthew D’Arrigo says. “We feel we have the best collection of labels and supply to offer to the market, and we supply it through a very experienced and youthful group of people who work here.”

Not only does the company distribute produce to its retailer customers throughout the New York region, but D’Arrigo Bros. Co. of New York also specializes in drop shipping. This technique involves retailers arranging with manufacturers or wholesalers to have products delivered directly to the final customer, rather than maintaining an inventory in their own stores or warehouses.

Responsible Operations
Without the innovations of the original D’Arrigo brothers, shipping fresh produce from coast-to-coast might look a whole lot different today, and the company continues to keep cold chain management top of mind. As the very backbone of its business, cold chain management is something the company says it can’t afford to ignore. “Maintaining a cold chain, and keeping fresh produce held at a given temperature from the time of harvest to the time of consumption is something we take very seriously,” the company says. “Routine monitoring and documentation of the temperature of refrigerated areas is the only way to make sure that the cold chain has been maintained. Our company aggressively monitors temperature and quality, thus ensuring our customers get the very best, fresh produce available on the wholesale market.”

In addition to guaranteeing the freshest produce in the marketplace, D’Arrigo Bros. Co. of New York says it also strives to provide its products in the safest manner possible. “Our food safety programs have been developed based on federal, state and local government agencies’ requirements and guidance,” the company says. “The products we sell are grown by high-quality and socially responsible farming companies around the globe. The vast majority of our fresh produce is field-packed within seconds of harvest, directly into the final package, to avoid multiple handlings that could damage or contaminate.

“Our suppliers are members of organizations such as the California and Arizona Leafy Green Marketing Agreements, confirming that their operations are regularly audited for food safety practices by the California and Arizona Departments of Food and Agriculture,” the company adds. “We are Global Food Safety Initiative (GFSI) certified. In addition, we have our operations audited by non-government third-party companies to ensure the safest products humanly possible.”

The company says it also recognizes the need to operate in a responsible manner that supports the long-term life of the farms it works with, as well as reduces waste. D’Arrigo Bros. of New York’s sister company, D’Arrigo Bros. of California, a grower packer and shipper, declares in its sustainability mission statement that “D’Arrigo Bros. Co. has been a responsible steward since 1920. We understand that what we are able to produce from the land is a direct result of how well we treat this precious asset. We will continue to champion solutions for tomorrow’s safe, accessible and nutritious food through our sustainable efforts.

“Together with our sister companies in New York and Massachusetts, we are committed to making efficient use of non-renewable resources, sustaining the economic viability of the agricultural sector, preserving family farming as a way of life and enhancing the environment and quality of life for all.”

Still Improving
D’Arrigo says change happens slowly in the wholesale produce industry, with occasional changes based on consumer trends or new types of packaging. “It’s a very slow, evolutionary type of thing that goes on in this market,” he says.

Nevertheless, D’Arrigo Bros. Co. of New York is working to make improvements to its facilities, including renovating some of its refrigeration space. “We’ve got a lot of capital improvements that we’ll be doing to our facility,” D’Arrigo says.