Back to Profile Gallery > Dave & Buster’s 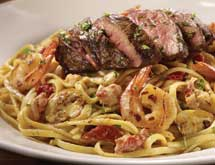 There are many concepts that offer both dining and entertainment, but none have the legacy that Dave & Buster’s has, President and COO Dolf Berle says. Based in Dallas, the company operates 61 locations in more than 20 states that feature large Midways (the D&B name for arcades) and signature entrees, burgers and cocktails.

CEO Steve King says the company’s history goes back to 1982, when founders Dave Corriveau and Buster Corley joined forces. Corley owned a restaurant in a shopping mall, and Corriveau owned an arcade and pool hall that was located across from the eatery.

When the two saw how customers went back and forth between the two locations, Corriveau and Corley got the idea to become partners. They opened the first Dave & Buster’s location in Dallas.

“They were really innovative and groundbreaking,” Berle says, noting that Dave & Buster’s locations today range from 17,000 to 65,000 square feet in size. In addition, some locations have up to 226 video games, and more than 300 player positions.

“We run the best Midway room in the United States,” King says, noting that the locations even feature games that people normally play on their iPhones or iPads, including Infinity Blade. “Those are games people are familiar with in the casual gaming space, but they translate quite nicely in the Midway.”

Dave & Buster’s also offers classic games to appeal to guests of different ages, Berle says. In addition to such classics as Skee-Ball and Pop-n-Shot, select locations also offer shuffleboard, bowling and billiards. “Our entertainment offering is splendid in its diversity,” he says. “No matter who you are, you’ll find yourself entertained.”

Equal or Above
Dave & Buster’s makes sure its food offering is as strong as its entertainment, CMO Sean Gleason says. “We want to make our experience one that is equal to or above the typical casual-dining restaurant food,” he says.

To accomplish this, Dave & Buster’s kitchens use premium products, including USDA choice steaks and 100 percent Angus beef for its hamburgers. “We have a variety of seafood items, including salmon, shrimp and lobster sauce,” he says.

Dave & Buster’s recently overhauled its food presentations. “Every single item was evaluated and re-plated,” Gleason says, in a process that focused on how it could create a better-quality experience for consumers.

Time of Reinvention
This year, Dave & Buster’s celebrates its 30th anniversary, which Berle says marks a time of reinvention for the company. “If you were to go into our newest stores in Dallas or Oklahoma, you would see a more contemporary feel at Dave & Buster’s,” he says.

The redesign includes the addition of more than 360 television screens. This will change the company’s focus of “eat, drink and play,” Berle says, to “eat, drink, play and watch sports.”

It will also help Dave & Buster’s grow from a place where people can play games to one where they can watch them, as well. King says the company began testing its new format in 2010 and started rolling it out in nine more locations in 2012.

“We’re under construction on another eight now,” he says. “We’re moving our way through the system and I expect we will address most of the system by probably 2014.”

Not surprisingly, Dave & Buster’s is hiring aggressively. “We’re in the business now of trying to recruit a number of people,” Berle says, noting that the company will fill up to 70 new positions in multiple areas this year.

Dave & Buster’s expects to add eight locations next year, Berle says. “We’re growing physical units by roughly 10 percent a year,” he says. “On top of that, we’re looking to expand our existing store sales by really making sure that we’re changing in innovative ways.”

Gleason adds that the concept also wants to be known as a place that is always changing.