Back to Profile Gallery > Dave’s Markets

Dave’s Markets opens a unique and community-focused supermarket and eatery in Cleveland.

Dave’s Markets is bringing a new community-focused and first-class shopping experience to Cleveland. A family-owned and operated regional supermarket chain in the Greater Cleveland area, Dave’s Markets has opened its 13th location in MidTown.

But this one is different from all the rest. It’s even branded differently from Dave’s other markets. It’s called Dave’s Market & eatery.

“It’s much more than a supermarket,” says David Saltzman, a fifth-generation member of the Saltzman family who supervises store operations, finance and strategic priorities with his brother Aaron Saltzman. “It has a food-court style eatery with third party vendors, a teaching kitchen that doubles as a community room, a pharmacy and even a bank.”

It even has a free shuttle service in select locations in Cleveland that transports its customers to and from the store.

When it comes to food options, its eatery features a variety of choices that include a hibachi and sushi stand, Mediterranean falafel stand, BBQ Grill, fried chicken and fish stand, sub sandwiches, salad bar and a grab-n-go area. It also has a coffee and drink bar. “There’s a lot of businesses in the area and this caters to the working crowd within a close proximity to the store and really all of our customers,” Saltzman says. 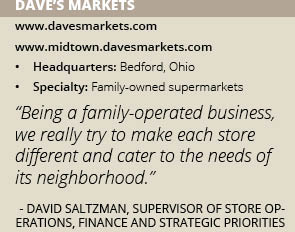 The teaching kitchen comes through a partnership with University Hospitals. It’s a place where organizations can reserve the space to host cooking classes and healthy eating events. “There are free cooking classes for the community or classes on how to eat healthy or on a budget, for example,” Saltzman adds.

Dave’s Teaching Kitchen & Community Room is available for both public and private events like corporate meetings or parties.

Other on-site conveniences at the new 55,000-square-foot supermarket and eatery include a First Federal Lakewood bank branch, pharmacy with a drive-thru and a liquor store. “In Ohio, only certain amount of retail locations can sell spirits and we have one at this location,” Saltzman says.

Because Dave’s Markets places a strong emphasis on its communities, Dave’s Market & eatery formed a partnership with and donates to the Cleveland Food Bank, a local nonprofit that address hunger issues.

Dave’s Markets has long been a staple in the Cleveland area. The company was founded in the late 1920s when Alex Saltzman, the first of five generations of grocers, hung up reins in his horse drawn produce wagon and opened the first store at the corner of 33rd and Payne Avenue in Cleveland. The store was named for Alex’s son, Dave who succeeded his father in the business.

Following in Dave’s footstep was his son Burton who recognized that the store needed to address the growing needs of its customers. Burton along with his two sons, Dan and Steve Saltzman, worked to expanded upon the company’s original vision and grew the chain. Burton, Dan and Steve remain active in the business along with Dan’s sons, David and Aaron.

Over the decades, Dave’s Markets has made significant investments into its stores. Some of these developments included the acquisition of four new locations in 2007 as well as the launch of Dave’s Mercado at the Ridge Road location. The Mercado provides the largest selection of Hispanic foods in the Cleveland area.

“Being a family-operated business, we really try to make each store different and cater to the needs of its neighborhood,” Saltzman says. “Each Dave’s location serves a unique and sometimes ethnically diverse community. From the largest variety of Hispanic foods at our Mercado location to the expanded assortment of specialty foods and organic foods at our Cedar Hill store and to our Kosher selections at Severance Town Center, each location is unique.”

Dave’s Markets also recently invested into its Ohio City location, which was remodeled, redecorated and started carrying new foods and products. “It’s another area of Cleveland that’s really growing and the store was remodeled to best serve the all of the customers.”

Dave’s Markets’ is famous for bringing fresh meat, seafood and produce to areas of Cleveland that lack it – filling a niche in the city’s “food deserts.”

“We focus on bringing a first-class shopping experience to areas that otherwise wouldn’t have it,” Saltzman says. “These food deserts are areas that don’t have access to a full-service supermarket where you can buy fresh meat and produce. We offer access to healthy food where it would be limited otherwise.”

Dave’s Markets is known for fresh cuts of meat, which is trimmed in-store by butchers on a daily basis. The company also partners with outstanding meat and poultry suppliers which allows it to provide its customers with a large variety of fresh meats.

Fresh fish arrive each day at the seafood department, which offers “catch of the day” specials. From chilled shrimp and wild fish to creamy seafood salads and crab clays, Dave’s offers a variety to its customers.

In fact, the company’s tagline is “Cleveland’s choice for meats.” Saltzman says. “Historically, our fastball has been having the largest and best variety of fresh meat and hand-in-hand with that is our produce.”

“In meat, a lot of our competition doesn’t even cut the meat in the store,” he continues. “We have butchers that can cut your steak in a certain way and in produce, we’re always trying new things.”

For example, Dave’s Market and eatery, Dave’s Ohio City location and a few other stores recently started selling freshly squeezed orange juice that customers can squeeze themselves with the help of a juicing machine.

When it comes to produce, that department is peppered with fresh fruits along with farm-fresh vegetables. It offers a large variety of the regular along with seasonal, exotic, and specialty produce. Dave’s purchases produce from small family-operated farms like Bauman Orchards in Rittman, Ohio. It works closely with these growers to provide Dave’s customers some of the freshest vegetables and the sweetest fruits in Ohio.

Dave’s bakery produces fresh breads and sweets daily. From pies to custom-decorated and fresh-baked breads and tasty confections, customers have an array of choices.

Dave’s Deli offers an assortment of lunch meats and cheeses sliced to order and many prepared items to make meal planning a snap. Customers find everything from healthy salads and freshly roasted chicken to a delicious selection of meats and cheeses from both national and local brands.

What’s next for Dave’s Markets? Does the chain plan to expand outside of Cleveland?

“Our company roots are in the city of Cleveland,” Saltzman says. “That’s where we started and that’s where we’ve grown from. With some locations currently in the inner ring suburbs, the family views growth on an opportunistic basis and that time will tell.”