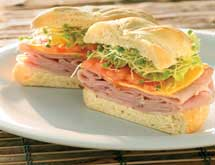 Building a sandwich is a lot like building a house. From the foundation to the trimmings, the quality of the materials used to put it together matter a lot. And just as the engineering experience builders have goes a long way to ensuring a strong and stable construction, Deli Star Inc. says its food science background makes it an invaluable partner to its customers.

In addition to the slicing logs, diced meat and pulled or shredded meats it sells to other processors, Deli Star also supplies a line of ready-to-eat meat entrees for retail outlets. The company also prepares post-pasteurized protein salads, fillings and toppings.

Siegel says Deli Star stands out from other manufacturers because of its concentration on the further processor market. The majority of manufacturers in Deli Star’s segment, he explains, concentrate their products on the retail market. By focusing its attention on the processor market, Deli Star fills a niche that few others are willing or able to accommodate. Nevertheless, Siegel says the company has its sights set on expanding its foodservice products in the coming years, and will do so by continuing to focus on the qualities that brought it to where it is today – technical know-how, a strong emphasis on food safety and working closely with the customer.

The experience and expertise at Deli Star doesn’t end with Dan Siegel’s doctorate, his son says. The company’s entire team is made up of people with experience in the foodservice industry, including sandwich makers with more than 30 years of knowledge. “What distinguishes us is the technical service we provide,” Justin Siegel says.

This technical knowledge extends beyond the products and into the production methods, as well. Deli Star has the expertise to help its customer organize their operations for greater effectiveness, Siegel says. “We would go in to see a larger customer of ours and provide a report of some efficiencies we would recommend,” he says, adding that the company also uses these tours to suggest the best Deli Star products to match the customer’s capabilities and needs.

The process also works the other way, as Deli Star’s research and development efforts are geared toward finding and creating products that will be of the greatest benefit to its customers. Siegel says this is another way in which the company breaks the mold of its main competitors, because it has the capability to respond quickly to what its customers need.

“We have the volume for the larger customers, but we’re small enough to adjust to provide the service for our customers,” he says.

Because the majority of Deli Star’s products go to processors who are themselves making products for their own customers, Siegel says the company’s emphasis on research and development is especially important. “We’re basically meeting the needs of a customer of a customer,” he says.

Within that mission, Deli Star remains locked onto providing the highest levels of food safety available. “Everything that leaves Deli Star is cooked or pasteurized in its original packaging, so it’s not exposed to any harmful pathogens or bacteria,” Siegel says. “We’re selling extended-shelf-life products that are free of all pathogens.”

With these measures in place, Deli Star appears to be equipped for the challenges of the future. Siegel says the company recently completed a $2 million expansion of its plant in Illinois, which provides the company with greater efficiency.

Deli Star also aims to boost its foodservice business in the coming years. Siegel says it recently launched Gaucho Foods, a line of premium slow-cooked meats intended to focus on the foodservice and quick-service markets. With this growing segment, plus the company’s existing success, Siegel says Deli Star will continue to be part of the foundation of its customers’ success.