Back to Profile Gallery > Delorio’s 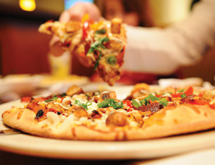 Dough is one of the most versatile food products – it can be formed into a loaf of bread, split up into dinner rolls or rolled flat to form the basis for a pizza. It only makes sense, then, that a manufacturer of frozen dough products should be as flexible and versatile as the product it makes, and that’s exactly how DeIorio’s has carved out a successful niche in the market.

As Sales and Marketing Assistant John Tackabury explains, the company’s ability to do whatever it can for its customers has been the backbone of DeIorio’s success over the years. Ever since 1924, when the company got started, DeIorio’s has been known for going further than its competitors to help customers.

Perfect Partners
In every single market segment that it serves, Tackabury says, DeIorio’s faces some stiff competition from the numerous other producers who specialize in frozen dough products. However, even though the company has multiple competitors in each of these segments, Tackabury says DeIorio’s has a substantial advantage over its competitors for several reasons.

“What separates us is our quality,” Tackabury says, adding that the company works to ensure that the ingredients it uses are the best available on the market. That has been more difficult in recent years due to the rising costs of flour and other ingredients, but Tackabury says DeIorio’s remains committed to maintaining the same high level of quality it always has.

Not only does DeIorio’s insist on using the best-quality ingredients it can find, but the company also works harder than any of its competitors to give customers exactly what they want. According to Tackabury, customers frequently approach DeIorio’s with requests for different types of dough products. The company’s new product development team reviews these requests on a weekly basis, determining which products can be manufactured on the company’s current equipment and which require investment in new equipment. If it makes sense for the company, DeIorio’s will make the investment and roll out a new product line.

Tackabury says another major advantage for DeIorio’s is that the company utilizes its own sales representatives to educate customers about its products. Many of its competitors, he adds, rely on brokers who may have knowledge of product lines but don’t have the same investment in making sure customers have all their questions answered as do DeIorio’s employees. “We’re able to go right to the end-user,” Tackabury says, adding that this capability has helped as the company has expanded into the private-label sector in recent years.

Leaders in Gluten-Free
DeIorio’s flexibility and willingness to make significant investments in new equipment have helped it make inroads into growing markets, including the gluten-free market. Tackabury says the company started making its first gluten-free products in 2007, and today that product line has grown into a substantial portion of its sales.

The company has dedicated a portion of its production plant specifically for the manufacturing of gluten-free products, and Tackabury says the market for such products continues to grow. In addition, DeIorio’s has acquired two of the highest levels of gluten-free safety standards from the Celiac Sprue Association and the Gluten Free Certification Associa¬tion. These certifications ensure the customer that the product is safe from gluten contamination. While other manufacturers are only just now beginning to make entries into the gluten-free market, he adds, DeIorio’s already has a strong presence and continues to add capacity.

Ahead of the Pack
Tackabury says DeIorio’s expects to continue holding its leadership position in the marketplace through the same advantages it has counted on for nearly 90 years, such as its embrace of innovation. The company recently installed a new topping line that expanded its capabilities to produce square and round pizza products. “That’s looking to be one of our biggest movers over the next five years,” Tackabury says.

The company also hired a food scientist recently to help it develop new products. Tackabury says the company’s new hire will be able to not only determine the best formulations to use for new products, but re-evaluate its existing products and possibly find new and more effective formulations. With these pieces in place, Tackabury adds, DeIorio’s will continue to be the kind of partner its customers need.