Back to Profile Gallery > DenSuccess Inc. 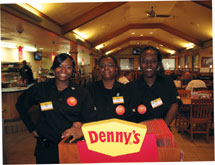 In the Horatio Alger stories, the hero would work his way up from dishwasher to owner of the restaurant. Carl Ferland did that literally and now has a high-flying career overseeing the operation of his 48 Denny’s restaurants throughout six southern states.

“I’ve only wanted one restaurant all these years, but I ended up with 48,” Ferland insists. “When the right opportunity comes, we look at it and we zero in on it if it’s the right thing for our company at the time.”

The majority of the restaurants owned by DenSuccess Inc. – which Ferland founded and owns – were acquired from other franchisees. “Some were company stores, and I opened a few of my own,” Ferland adds. He estimates that of Denny’s 1,600-plus locations, approximately 90 percent are franchise-owned.

Now the fourth-largest Denny’s franchisee, Ferland flies his own plane to supervise all of his locations. Flying the corporate plane enables him to visit most of his restaurants weekly.

“I wanted to see more of my restaurants more often, and I also liked to spend a lot of time back home,” he explains. “So I figured the quickest way to get there and back was to have an airplane. Flying is not difficult – you just need to pay attention and know what you’re doing.”

Cleaning Up
Ferland started in the hospitality industry at age 14 washing dishes and cooking at a small restaurant in Davie, Fla., while he attended school. At age 16 in 1973, he started washing dishes at a Denny’s in Fort Lauderdale, Fla., to earn money to pay for his first car. This was the beginning of his lifelong association with the Denny’s brand.

After high school graduation, he became an assistant manager at Denny’s, and two years later, a general manager. At the age of 25, Ferland was made a district manager in West Palm Beach, Fla., and nine years later, he was transferred to the corporate office in Spartanburg, S.C.

During Ferland’s last four years at Denny’s corporate, he acted as the liaison between the home office support department and the field leadership. “My role was to bring the expertise of the field to the support teams, to make sure the decisions that were made could be executed in the field,” Ferland notes.

Those departments included re¬search and development, quality control, marketing and human resources, to name a few. In 1994, after working 21 years for the Denny’s corporation, he was given the opportunity to buy his first Denny’s restaurant in Raleigh, N.C. “Going back to running a restaurant was not going to be easy, but it’s what I wanted to do,” Ferland stresses. With the help of his wife Colleen and their two daughters, they took this challenge head-on.

Ferland also is a founding and board member of the Denny’s Franchisee Association (DFA), which currently has more than 275 members, approximately 80 percent of the total Denny’s franchisees, he estimates. The association provides feedback to Denny’s corporate team and provides assistance with operation, development, marketing strategies and remodeling, which Ferland does at his restaurants approximately every seven years.

The Same Slam
Ferland characterizes the typical Denny’s customers as either blue-collar, seniors or young families. The menu of the mostly 24-hour family casual chain is set by its corporate office, including the Grand Slam, the company’s economical combination of bacon, sausages, eggs and pancakes.

“Denny’s hasn’t changed much,” according to Ferland. “It’s serving pancakes and eggs to customers who come in and want to be in an environment where they are comfortable and know what they get from one restaurant to another. We still serve the Grand Slam in every one of our restaurants as when it was started in 1977.”

But Ferland admits the menu has evolved over the years. The breakfast menu has expanded far beyond the seven combinations the chain offered when Ferland started. “It’s what the guests want,” he emphasizes. Many dishes that once were regional are now offered nationwide.

“We have great dishes for all parts of the day,” Ferland declares. “Our breakfast skillets are some of the best dishes we offer, along with healthy menu items. Our $2, $4, $6, $8 Value Menu has really helped our guests during this tough economy. You’ve got to give the variety your guest is looking for to stay up with the competition.”

Team to the Rescue
The major challenge for DenSuccess in recent years has been the economy. “We’ve had to really focus on all of our cost categories – food costs in particular – because the commodities have gone up so much,” Ferland laments. “You’ve got to do a better job managing waste and portioning in your restaurants so you can still make a profit.”

Reducing staff to save costs also is problematic. “You can only reduce staff so much until you start affecting your service,” Ferland points out. “You need to cut back to meet your revenue stream, but not to the point where you can schedule yourself out of business.”

Ferland is quick to praise his entire team. “Our success over the years has been because we have had team members who look at the challenges in our industry as opportunities to do better every day,” he says.

“They are always up for any challenge. I am blessed to have some of the best leaders, management teams and support staff in the industry. They are committed to ensuring that our guests are No. 1.”