Back to Profile Gallery > Diamond Bakery 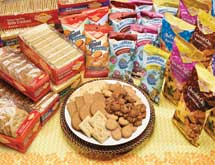 In his 10 years as president of Diamond Bakery, Brent Kunimoto has realized that every Hawaiian has his or her own memory of the crackers and cookies baked by the 90-year-old company. Kunimoto remembers being sick and staying with his grandmother for the day. She would serve him soup along with Diamond Bakery’s soda crackers, and after he ate, she would stroke his forehead to comfort him.

“So from time to time I will eat one of the soda crackers, and it will bring back the memory,” he says. “I’ve heard hundreds of stories, all unsolicited, and time and again I see people’s excitement of their own flashbacks. And that’s what makes our company special; we have a 90-year heritage of bringing people comfort.”

Now, with a recent expansion into the Southwest, others will soon create their own memories of the “onolicious” (“delicious” in Hawaiian slang) Diamond Bakery cookies and crackers, too – but with a twist.

Several of Diamond Bakery’s core recipes have been around almost as long as the company itself. The original soda cracker has a full-body flavor that hasn’t changed for the past 85 years. The Ruff N’ Ready shortbread cookies and Royal Creem crackers have passed their 80th anniversaries.

“We have a lot of products that are No. 1 here in Hawaii,” Kunimoto says. “Yet, we didn’t have too many offerings that addressed some of the concerns of people who are looking for more health-related products. Over the last several years, we’ve developed offerings for health food stores and are really looking at that to be a major market for us.”

The company’s original products have a major presence throughout Hawaii, and in select stores in Japan, Australia and the East Coast. Now, with the roll­ing out of its all-natural soda Creem, and graham crackers, these new products will soon be found in California, Colo­rado and elsewhere in the Southwest.

“We started expanding six months ago, and it’s really accelerating because of the interests of retailers and distributors,” Kunimoto says. Whole Foods authorized all of its Southern California stores to carry the line, and as of December 2010, 20 of those locations had already done so.

In addition to its newest all-natural line, Kunimoto has overseen past product launches that incorporate Hawaiian ingredients. For instance, there is the Maui Sugar Graham Cracker and the Hawaiian Cinnamon and Honey Cracker. But whether it’s original, all-natural or a Hawaiian version, each product goes through the same process.

The one ingredient that never changes is the Artesian well water that has naturally filtered through volcanic rock. Kunimoto says the water is vital to Diamond’s distinct flavors. Also, each cookie and cracker is hand-selected three times. “We insist on high quality and believe the human process when done many times is better than an automated process,” Kunimoto says.

All of its operations are handled

out of a single Honolulu facility. So whether it’s research and development, product testing or distribution, the company is able to make quick decisions with all key people involved. And at the end of the day, each department is align­ed with one goal: spreading “heart-warming aloha.”

It’s a tradition passed down from the company’s original owners – Hidegoro Murai, Kikutaro Hiruya and Natsu Muramoto – three friends who were all Japanese immigrants. They would talk about developing tasty, affordable treats for Hawaiian families, but were denied the bank loans needed to fund their dreams. Then the group found Janet McIntyre, a 20th-century immigrant rights advocate who provided the loan.

“That formed the foundation of the philosophy and spirit of Diamond Bakery,” Kunimoto says. “This woman helped get them the money they needed, and they in turn gave back to the people. And today, we still focus on sharing heart-warming aloha with people around the world.”

Kunimoto says this is done in two ways, first through the product itself – the cookies and crackers that are main characters in so many memories. The second is through helping other’s dreams come true, like it came true for Murai, Hiruya and Muramoto.

Recently the company sponsored its “Make and Bake” event, where families created historical objects or landmarks using Diamond Bakery crackers. One family’s miniature Noah’s Ark won it $1,500. The company is also a supporter of the American Heart Association and United Way. Since 2008, it has been recognized for its work in living reef conservation and ocean care.

“We are not just a product-focused company, and we’re not just community-focused,” Kunimoto says. “The two things are critical in showing we do care in simple yet effective ways. Our commitment is for this little company in Hawaii to spread heart-warming aloha to the world, from now to forever.”